Arkansas women on hold due to weather 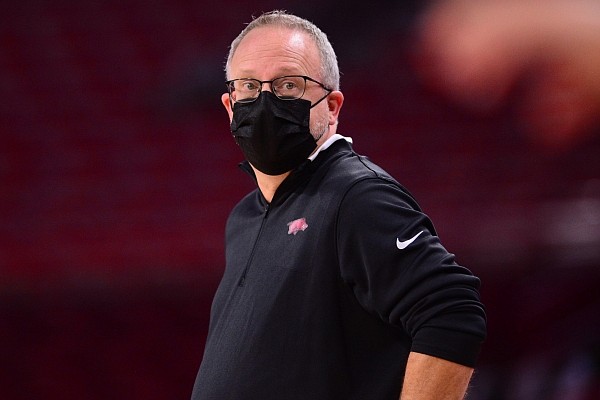 FAYETTEVILLE — The University of Arkansas women’s basketball team has made it a mission to play as many games as possible this season despite the coronavirus pandemic. Now Mother Nature has entered the fray.

The No. 18 Razorbacks’ game against Ole Miss for tonight was one of four SEC games that have been postponed because of wintry weather conditions throughout the South, the league announced Wednesday morning.

Arkansas Coach Mike Neighbors said everyone is adjusting on the fly this season. But coming off an open date extends the layoff, which is new for his team this season.

We’re in that be bendable mode … be ready, hopeful for Friday. If not Friday, go from there with LSU on Sunday,” said Neighbors, whose team still leads the country in games played. “Uncertainty’s been a huge part of the entire season.

“For us falling off of a bye game, trying to keep us in that rested, rusted, tested mode has been a challenge. But the kids are handling it great, and coaches are working through it.”

Arkansas (15-7, 5-6 SEC) has won four out of its past five, but it’s now been a week since the Razorbacks defeated Mississippi State 86-80 at Walton Arena.

It is showing, Neighbors said.

“The first 30 minutes of practice [Tuesday] looked like we hadn’t touched a ball in a month,” Neighbors said. “We got back going. I told them that’s OK. I think in the long run it’ll be a good thing.

“The concern is I don’t have any working knowledge of how this group particularly will handle it. We had a good little rhythm going, and you worry about time off disrupting some of that timing. Could be good. Could be bad. Could be indifferent.”

Neighbors would like to get the Ole Miss game made up before Sunday when the Razorbacks are scheduled to travel to LSU.

“Between now and Sunday, it makes sense,” Neighbors said. “I think we get past that, now you’re starting to bring in the SEC Tournament … you start getting into where it might not be best for the kids.

“I think once you get even past Friday, now you’re looking at affecting an awful lot of dominoes down the line that you might have reached a tipping point in value over risk.”

If the game is rescheduled for Friday, it could serve as a postseason rehearsal by playing one day, then having a one-day prep for another game.

“It could be kind of good preparation for the NCAA Tournament where you play a day, if you win, you get to play again,” Neighbors said. “So we can spin it into a positive. I hope we get a chance to play it.”

Neighbors noted the game might be more vital for Ole Miss. The Rebels (9-7, 3-7) have won two straight and are in the discussion for an NCAA Tournament at-large bid, according to the latest bracketology by ESPN’s Charlie Creme.