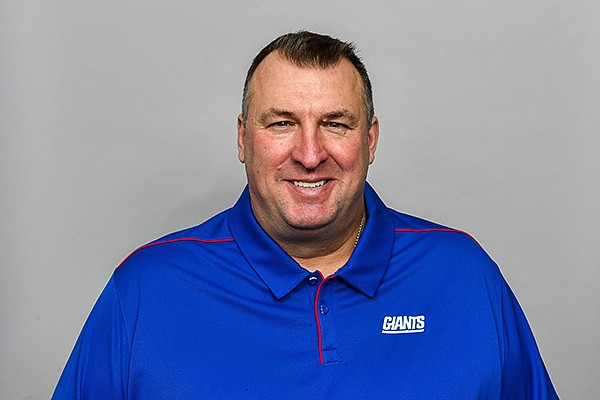 This is a March 5, 2020, photo of Bret Bielema of the New York Giants football team. (AP Photo)

FAYETTEVILLE — Former University of Arkansas football Coach Bret Bielema’s trial date in his lawsuit against the Razorback Foundation has been moved to the week of Jan. 10, 2022.

U.S. District Judge P.K. Holmes III entered a final scheduling order in the case on Wednesday, moving the jury trial that had originally been scheduled for this June into early next year.

The two sides, at odds over their final buyout agreement, have been filing contentious motions the last several months. The foundation, represented by Marshall Ney of the Friday Law Firm in Rogers, has also counter-sued Bielema and his agent, Neil Cornrich.

Holmes also mandated that discovery in the case must be completed by May 3, and all motions, with few exceptions, must be filed on or before May 24.

Bielema’s attorneys, led by Tom Mars, who has offices in Rogers and Atlanta and is well known for his work in college athletics, filed their original lawsuit for $7.025 million in June 2020. They argued the Razorback Foundation broke the terms of their original buyout agreement, which called for $11.9 million in buyout payments through the end of Bielema’s contract in December 2020.

The foundation’s countersuit demanded repayment of the $4.5 million it had given Bielema in monthly payments through January 2019. The foundation argued Bielema did not seek a job commensurate with his standing in college football, and that Bielema and Cornrich had conspired with the New England Patriots to keep his pay below the threshold that would have mitigated some of his buyout payment.

Bielema was hired as Illinois' football coach in December.