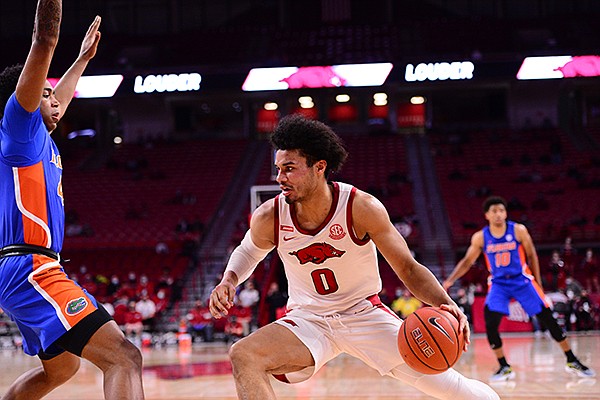 Arkansas' Justin Smith drives toward the basket during a game against Florida on Tuesday, Feb. 16, 2021, in Fayetteville.

For now, the Arkansas Razorbacks sit alone in second place of the SEC men’s standings behind only Alabama.

LSU would have moved back into a tie for second with the Razorbacks with a win over Ole Miss, but that game along with two other SEC contests slated for tonight were snowed out.

The Razorbacks’ 75-64 victory over Florida on Tuesday night moved them up only one spot to No. 24, despite the fact the Gators — who are ranked No. 30 — are considered a Quad 1 victory.

Arkansas’ seven-game SEC winning streak has been a magic carpet ride while picking up two Quad 1 wins as of Wednesday.

With four SEC games left — five if the league decides to use the final Saturday before the conference tournament for make-up games (Texas A&M covid-19ed out of an earlier game with the Hogs) — the Razorbacks are not a sure-fire NCAA Tournament team, but they are getting mighty close.

It seems like there will be an SEC Tournament. If the Hogs continue to win, they’ll go to Nashville, Tenn., with a chance to help their NCAA Tournament seeding but most likely couldn’t hurt it.

What the Hogs have left is Texas A&M in College Station, where the Aggies have been a little more competitive, this Saturday. Then there’s back-to-back, hard-as-Hades games in Bud Walton.

On Wednesday, the Hogs face SEC leader Alabama, which is 12-1 in league play and 17-5 overall. The Crimson Tide are No. 8 in the NET rankings and looking to play themselves into a No. 2 seed in the NCAA Tournament.

Alabama crushed the Hogs 90-59 in the first meeting.

That’s followed on Feb. 27 with LSU, which beat the Razorbacks 92-76 in Baton Rouge.

The Hogs close the season at South Carolina, which has had to cancel three SEC games because of the virus.

Losses to Alabama and LSU would not be devastating, but win both and the Razorbacks are definitely dancing in Indianapolis.

Against the Gators on Tuesday night, the Hogs again flirted with letting a game slip away.

They were up 45-30 when it seemed defense suddenly wasn’t as important as offense.

When Florida took a 62-61 lead, the Razorbacks woke up, played great defense inside and out, and pulled away with the victory.

Florida is a good basketball team, always solid and a threat to win any time since Mike White became the head coach.

The Gators’ three previous games had been canceled because of the virus, and they were a little ragged to start the first half.

They did not forget how to shoot the ball, putting up 36 attempts, but remembering how to make those shots was the issue. The Gators made only 11 (30.6%) and trailed 40-30 at the half.

One of the main reasons the Hogs have gone from 2-4 to 9-4 in SEC play is teamwork.

This team is no longer young and trying to blend with older transfers. The Razorbacks are 17-5 overall, and when they play unselfish they usually win.

Against the Gators, five players had an assist and the team totaled 12. That’s a decent number.

On a night when Moses Moody didn’t have a great game, going 3 of 14 from the floor, Jacksonville freshman Davonte Davis stepped up and scored 18 with 5 rebounds, 3 assists and a steal.

Justin Smith continues to be the consummate team player since his ankle injury, but these Razorbacks have to play as a team, pass the ball on offense and never let up on defense. Jalen Tate is steady on both ends of the court, and Connor Vanover presents his own problems for teams.

The light at the end of the tunnel is March Madness.