On the run: Davis dangerous in open floor 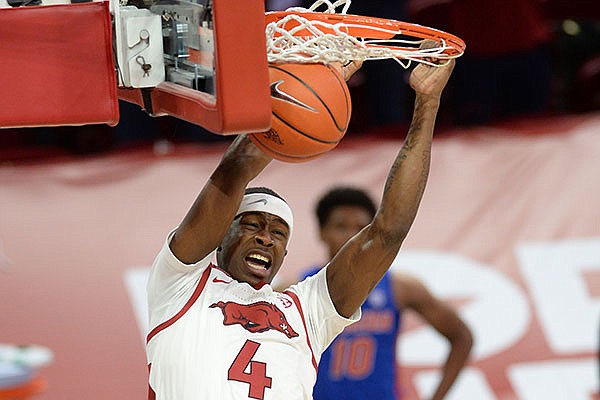 FAYETTEVILLE — Davonte Davis is a handful in the open floor.

Florida learned that the hard way on Tuesday in its 75-64 loss to Arkansas in Bud Walton Arena. Davis finished with a game-high 18 points and contributed nearly half of the Razorbacks’ 17 fastbreak points.

The highlight of his night was a layup in transition following a Gators turnover that put Arkansas ahead 63-62 with 3:28 remaining. The Razorbacks never trailed again.

“I had to finish that one,” Davis said Tuesday.

For the game, he finished all of his opportunities in transition and accounted for four of Arkansas’ five scores in that area. His first two field goals of the night came with the Razorbacks on the run.

Davis added a dunk off a Jalen Tate feed then got a layup assisted by Justin Smith to go all in a 20-second span. Later, with under three minutes to play in the first half, he grabbed a defensive rebound and went coast to coast for another bucket, finishing around 6-10 Florida forward Omar Payne.

Davis has been a threat in transition for much of the season, and he leads the team in such scores the last four games with five on seven attempts. Smith is second with three in four chances.

According to HoopLens data, Davis has a points above median figure — a calculation of how many additional points a player scores when compared with what an average player would have scored with those shot attempts — of 5.8 at the rim in transition. His PAM against Florida was 2.1.

He registered a 3.2 in the team’s win over Georgia on Jan. 9 when he finished with a career-high 20 points.

Davis’ speed and length are key to his success in broken floors, and Musselman sees a player in his element in those situations. His change of direction and craftiness are pluses.

“He’s got an in-and-out dribble, he can lean his body one way and take the rock to the other way,” Musselman said Thursday. “You know, he’s just got really great one-on-one ability. He’s got great deception, great speed to go along with it.

“He’s unorthodox, and I think that really helps him, too. Being a lefty helps.”

Transition has been his best scoring avenue of late, but Davis has also knocked down four midrange jumpers off the dribble and added three scores on drives to the rim in the halfcourt in the last four games.

Musselman said the freshman is elite in the open floor and has a nose for recognizing and simultaneously attacking even the smallest of creases.

“Where there’s a gap in a defense, he seems to find it and kind of slither through it,” he said. “(We will) just keep working with him on becoming a point guard, as well. I think that’s the next evolution to his game as we look kind of into the future for Devo.”

Smith, who is in the midst of his most impressive stretch in a Razorbacks uniform, believes Davis is playing his best basketball. He can see, too, the freshman’s confidence is sky high.

“I’ve never seen a kind of player like him,” Smith added. “I mean, he’s just always around the ball. He kind of just makes things happen. You’ve just got to let it happen.

“You’ve just got to give him the ball and say, ‘Go make a play,’ sometimes.”