State of the Hogs: Goodheart brings bop high in lineup 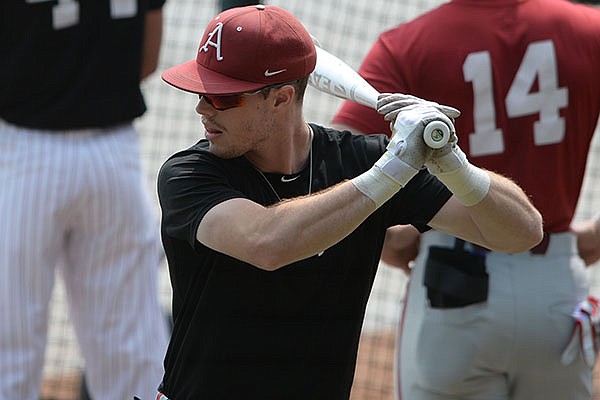 There is fan consternation about the big boppers gone from the Arkansas baseball lineup, but it’s clear that plenty of bop is still around. Matt Goodheart is the centerpiece of the bop.

The Magnolia product can hit for average, power and will probably lead the team in on-base percentage because of a great approach at the plate. He’s a potent lefty bat set to hit third in the lineup again this season.

Robert Moore and Christian Franklin are likely to hit in the first two spots for Dave Van Horn’s Razorbacks. Goodheart fits next as a solid RBI threat.

“We hit Goodheart third all fall and through January,” Van Horn said. “Matt really could be a leadoff man for us because he knows the (strike) zone, but he can drive in runs and we want him hitting behind Moore and Franklin.

“He’s a lefty who can hit to the entire field. He’s got power, too."

Moore is a switch hitter in the leadoff spot, Franklin hits from the right side and Goodheart bats left handed. Van Horn said he likes the right-left balance in the first three spots in the batting order.

"You look at your lineup and you think, 'OK, how can we maximize this guy?'" Arkansas hitting coach Nate Thompson said. "There (is software) you can purchase to where you can put lineup projections into it based on past season stats and fall stats, and it'll spit you out a number based on what that position is worth or that lineup is worth.

"I give Coach Van Horn a lot of credit because he just keeps advancing. He doesn't just stay with, 'The leadoff hitter has to be a bunter and the two hole just has to get him over, and the three and the four hole are the only guys who can drive the ball.' You just want complete players and you want to have a tough lineup."

Goodheart doesn’t care where he hits. He stepped into the No. 3 spot as a first-year player with the Razorbacks in 2019 for the Vanderbilt series.

“Hitting three to me is just another spot (in the batting order),” Goodheart said. “I’ve been there since that Vandy series. The only thing that ever matters is the guys around you.”

That promises to be good throughout what could be another potent Arkansas lineup. The Hogs have hit a lot of home runs of late. It’s not clear if that will be their identity this season.

“It’s hard to say (on identity) right now,” Goodheart said. “Every lineup is a little different. But we are deep. We even have guys who can come in to pinch hit and stay in the order.

“It’s not easy replacing guys like Heston (Kjerstad) and Casey (Martin). Those are elite guys. But we are just as deep.”

Goodheart was hopeful to play every day at first base, but he’s still rehabbing from shoulder surgery in the summer of 2019. He might play at first later this season, but is going to be the DH when the Hogs open play this weekend with games against Texas Tech, Texas and TCU at the College Baseball Showdown.

“His arm is better,” Thompson said. “He’s still working on it. But he’s just a natural hitter. That hasn’t changed.

“You watch him in the box, there are all these gyrations. It’s peculiar, but he’s baseball smart and he knows what he’s doing. He knows his approach.

“He’s always going to hit and be on base. He can hit one or as deep as four.”

Goodheart keeps his bat in the strike zone as long as anyone on the team.

“He does have a lot of zone in his swing,” Thompson said. “Because of that, there is a lot of room for error.”

Van Horn calls Goodheart’s approach at the plate “real mature. He stays in the zone.”

That leads to a lot of walks — 34 in his first full season two years ago. He’s also considered a great hitter with two strikes and that leads to patience.

He led the team in hitting with a .345 average as a sophomore in 2019, his first season after transferring from San Jacinto (Texas) Junior College. He hit .369 in SEC games after he was prescribed contact lenses.

“Teams know him and they pitch around him,” Van Horn said. “He doesn’t chase.

“Sometimes he will have a bad at bat, but it does not faze him. He comes back the next time and hits it off the top of the wall.

“SEC coaches voted him first team DH-utility this year, so he’s well respected around our league.”

Van Horn said Goodheart understands how to stay ready as the DH.

“It’s not as easy as it looks,” Van Horn said. “There is more to it than you might think.”

Goodheart stays in the game in between at-bats with stretching and running.

“You need to keep the body hot,” he said. “You keep moving. You don’t want to go to the plate and not have your body moving. Baseball requires quick movements and you don’t want to get hurt.

“I watch the pitchers and I cheer on my teammates. That’s part of what I try to do (to stay in the game).”

There may be a lot to cheer this season. The Razorbacks have a strong defensive team. Goodheart aches to be part of an infield that features Jalen Battles at shortstop, Jacob Nesbit at third base and Moore at second base.

Cullen Smith and Brady Slavens are likely to rotate at first until Goodheart’s arm arrives. Van Horn isn’t sure when the latter will happen.

“The (arm issue) comes and goes,” Van Horn said. “He might be able to play in the field sometime this season.”

“(The infield) is really fun to watch,” Goodheart said. “We are really impressive up the middle. Robert is so quick and has great hands. Jalen is the prototypical shortstop, just smooth. Jacob is so good.

“I see the way (Smith and Slavens) work and they are going to be really good, too. I think I’m getting there with my throwing. It’s a lot better.”