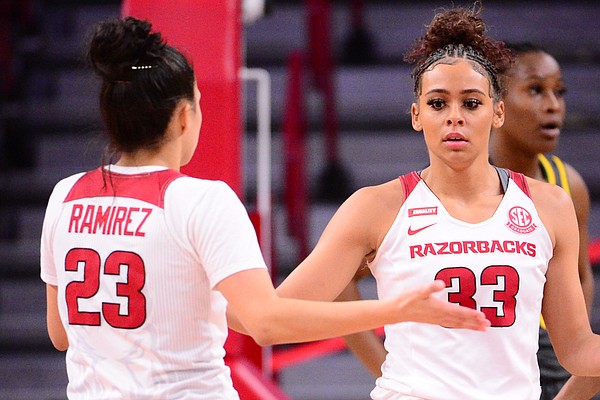 FAYETTEVILLE — The No. 18 Arkansas women’s basketball team remains strongly in the running for an NCAA Tournament berth that eluded them a year ago because of the pandemic.

The Razorbacks will now get a little postseason preview at least schedule-wise this weekend thanks to Mother Nature.

That game along with three other league games were postponed because of winter weather throughout the region.

Similar to what would happen in the NCAA Tournament, the Razorbacks will play today, then get a prep day Saturday before traveling to Baton Rouge to face LSU on Sunday.

The Razorbacks, who have won four of their past five, were in the discussion for one of the top 16 seeds for the NCAA Tournament if the season ended now, according to Nina King, the tournament committee chairman. But Arkansas was not chosen.

Arkansas, which has a victory over top-ranked Connecticut, is tabbed as a No. 5 seed in the latest bracketology by ESPN’s Charlie Creme.

The top 16 were revealed Monday night at halftime of the Stanford-Oregon game and included five SEC teams. There will be another reveal in two weeks. The field of 64 will be announced on March 15.

Arkansas hasn’t played since its 86-80 win Feb. 11 over Mississippi State. Destiny Slocum and Chelsea Dungee were a potent 1-2 punch for the Razorbacks in the victory. Slocum scored a game-high 26 points. Dungee, who leads the SEC by averaging 21.9 points per game, added 22, and in the process became just the second Arkansas player to top 2,000 career points.

The career points show Dungee’s consistency, but Arkansas Coach Mike Neighbors also pointed out she’s also been big against the best, too.

“The 2,000 points, that’s rare-air type thing. … Chelsea’s accomplishments are legacy type, leading things and then you put into context with how she did it and when she did it. The day she showed up we were picked 14th in the league. So it wasn’t like she was walking into a pat hand. Also the schedule which she’s done it against.”

The Rebels, who have won two in a row, have worked their way into the postseason conversation buoyed by the play of 6-5 Shakira Austin, a transfer from Maryland. She leads the team averaging 17.6 points and 8.4 rebounds per game.

Neighbors said Ole Miss comes into this game with a head of steam and a bunch of newcomers.

“They’ve increased their depth, they’re playing 10 or 11 kids,” Neighbors said. “They are peaking at the right time. It’s a completely different team. I told our group [Tuesday] Mimi Reid might be the only one y’all will recognize walking through the door.