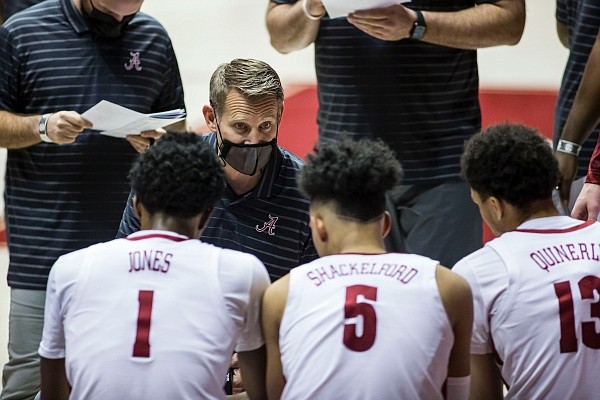 Alabama head coach Nate Oats works with his team during a timeout during the second half of an NCAA college basketball game against Western Kentucky, Saturday, Dec. 19, 2020, in Tuscaloosa, Ala. (AP Photo/Vasha Hunt)

TUSCALOOSA, Ala. — Alabama basketball coach Nate Oats has received a three-year contract extension and a hefty raise amid the program's best season in years.

The Crimson Tide is No. 8 nationally and has a sizable lead in the Southeastern Conference entering the stretch run of the regular season. It's the highest ranking for Alabama since the 2006-07 season.

"We feel like we have a lot of positive momentum going with our team and have the program headed in the right direction," Oats said in a statement. "Our administration is making a major statement with this extension as we all work on building a successful program for the long term.

"I know the winning history we've had with Alabama basketball, and I feel like we can add to that and accomplish great things here."

Alabama hasn't been ranked in the top 10 in mid-February since 2002. The Tide is widely projected as a No. 2 seed in the NCAA Tournament, which would match its highest in program history.

Alabama, which hosts Vanderbilt on Saturday, is two wins from clinching the program's first regular-season SEC title in 19 years. The Tide is scheduled to travel to No. 24 Arkansas on Feb. 24.

Oats has a 33-20 record in his first two seasons after leaving Buffalo. He led Buffalo to three NCAA Tournament appearances in four seasons from 2015-19.

"We had great expectations when we hired Coach Oats," Byrne said. "He has exceeded those expectations, and we want to ensure he is compensated among the top half of the SEC.

"We have put buyout measures in place that show the long-term commitment between both parties."

Alabama didn't release details of the buyout. The contract is pending formal approval by the Board of Trustees.