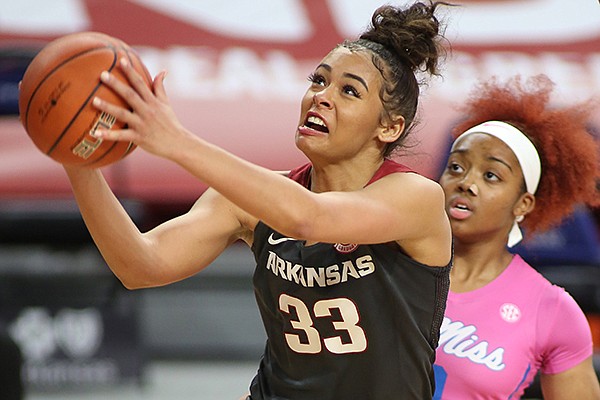 FAYETTEVILLE — Arkansas guard Chelsea Dungee scored a season-high 38 points to lead the No. 18 Razorbacks to an 84-74 victory over Ole Miss on Friday night at Bud Walton Arena.

She had 33 points at the end of the third quarter to account for more than half of her team's scoring. The Razorbacks led 64-51 at the time.

Dungee eclipsed her previous season high of 37 points scored against Connecticut on Jan. 28 and scored more than 30 points for the 12th time in her career. She has scored in double figures every game this year for the Razorbacks (16-7, 6-6 SEC).

Dungee and Amber Ramirez (19 points) carried Arkansas, which was without senior point guard Destiny Slocum due to an illness that was not related to covid-19.

The Razorbacks used a 12-0 run late in the first quarter to create some separation after the Rebels tied the game at 11-11.

The Razorbacks outscored the Rebels 23-15 in the third quarter behind 15 points from Dungee in the quarter. She scored the first seven points after halftime and hit a three-pointer in the final minute to extend Arkansas' lead to 13.

Ole Miss opened the fourth quarter on a 9-0 run to pull within 64-60 on Shakira Austin's jumper with 7:42 remaining.

But Arkansas responded with a back-breaking 10-1 run that included four points by Dungee and three points apiece from Erynn Barnum and Marquesha Davis. Barnum, Davis and Makayla Daniels all scored seven points.

Ole Miss (9-8, 3-8) was led by 17 points apiece from Austin and Madison Scott, who both had double-doubles with 11 and 10 rebounds, respectively. Mimi Reid added 16 points.

Friday's game was played one day later than originally scheduled due to a winter storm that disrupted Ole Miss' travel plans earlier in the week. Arkansas won its fifth straight game in the series.

The Razorbacks, who have won five of six games beginning with the victory over No. 1 UConn three weeks ago, are scheduled to play again Sunday at LSU at 5 p.m.