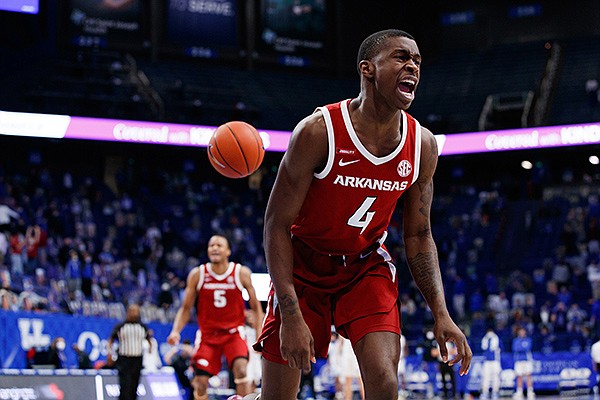 FAYETTEVILLE — The Arkansas Razorbacks’ 75-64 victory over Florida on Tuesday in Bud Walton Arena was closer than the final 11-point margin indicated.

It was a one-possession game with 1:28 left after Tre Mann hit two free throws to pull the Gators within 67-64.

But as has been the case through much of the No. 24 Razorbacks’ seven-game SEC winning streak, they found a way to pull out a close victory with plays on both ends of the court.

Arkansas pulled away with stops on Florida’s last five possessions — when the Gators combined for three turnovers and three missed three-point attempts — and by hitting 8 of 10 free throws in the final 1:02.

It was the fourth game during the University of Arkansas’ SEC winning streak that was decided in the final seconds.

“I certainly think it helps us going forward,” Razorbacks Coach Eric Musselman said. “So many games in this conference come down to the last three minutes. It’s important to execute on both sides of the basketball.”

With a revamped nonconference schedule because of the coronavirus pandemic, the Razorbacks lost a game against Oklahoma in Tulsa and a possible matchup with Louisville in Las Vegas. A game at Tulsa was canceled because of covid-19 issues within the Golden Hurricane’s program.

Going into SEC play the Razorbacks were 8-0 against a schedule of mid-major programs with the closest being Arkansas’ 87-76 victory over Oral Roberts.

“A lot of people [were] talking about our nonconference, and we didn’t have close games, and would we be able to finish, and all that happy you know what,” Musselman said. “We’ve been able to do a really good job of finishing when we’ve been in those situations.”

Razorbacks Moses Moody and Justin Smith combined to wall off Auburn guard Sharife Cooper from the basket as he missed a driving attempt that would put the Tigers ahead with four seconds left.

Arkansas won 81-80 at Kentucky when Jalen Tate hit two free throws with 4.3 seconds, and Davonte Davis made a steal to clinch the victory after the Wildcats had rallied from down 72-60 to take an 80-79 lead with 12.4 seconds left.

The Razorbacks won 86-81 in overtime at No. 10 Missouri when they regrouped after the Tigers overcame a 73-69 deficit in the final 42 seconds of regulation.

Tate blocked a shot with 18 seconds left in overtime that would have given Missouri the lead, then Moody hit two free throws.

Davis partially blocked a three-point attempt by Xavier Pinson with Arkansas ahead 84-81, then Smith hit two free throws to clinch the victory.

“When we need a stop down the stretch, we’ve been really, really good of late for sure,” Musselman said.

“I think during that stretch we had a lot of turnovers, and we weren’t really getting good shots,” Smith said of the Gators’ comeback. “They kind of took us out of our rhythm offensively and it took us a while to get it back. They got a lot of easy baskets on the other end, too.

“But I think we’ve shown over the course of the season our ability to win these close games.”

For the third consecutive game, the Razorbacks won after losing a lead of at least seven points in the second half.

“Granted, we shouldn’t have been in that position in the first place,” Smith said. “We should have been able to keep that lead, but the fact that this keeps happening, and we are able to pull it out and win in the end, is a testament to our mental toughness.”

Musselman said there’s a feeling of calm from the players during huddles whether the Razorbacks are ahead or behind.

“The timeouts have an inner confidence to them,” Musselman said. “I just think there’s been really good composure of late down the stretch of games.

“Everyone kind of understands their roles, exactly what’s needed, and we’re a little deeper as well. All those things have helped us in close games.”

Musselman said Moody, Davis and Jaylin Williams — all freshmen — have done a good job of following the lead set by Tate and Smith — both senior graduate transfers.

“I think the calming influence for us every game has been Jalen and Justin,” Musselman said. “In the huddles, at halftime, when we talk about adjustments, those two guys are probably the huge keys to our composure, and you would expect that from guys who are seniors.”