Arkansas a different team with Smith 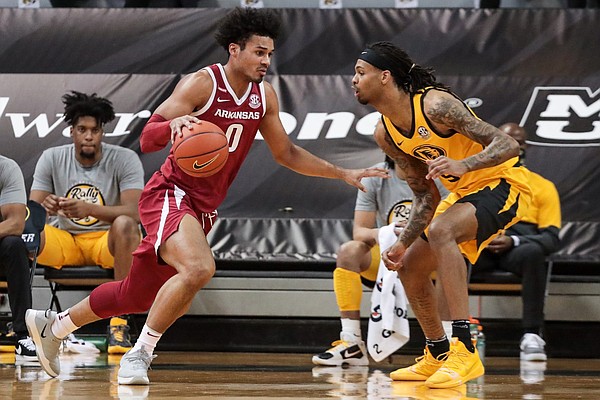 FAYETTEVILLE — To some it seems an asterisk accompanied Arkansas’ 86-81 overtime victory over Missouri last Saturday in Columbia, Mo.

Because of a death in his family, Mizzou center Jeremiah Tilmon last Saturday wasn’t at Mizzou Arena.

Tilmon double downed the Razorbacks with 25 points and 11 rebounds when the Tigers clawed Arkansas 81-68 in their first SEC clash Jan. 2 at Walton Arena.

So when asked what it was like for Missouri playing the Arkansas rematch minus Tilmon, Arkansas coach Eric Musselman parried with a question.

"I don’t know,” Musselman replied. “I wonder what it was like for them to play us without Justin?”

Smith was long back at it and then some last Saturday. Like a laborer on a sweltering summer’s day oozing sweat from every pore, Smith oozed productivity from every stat. For 38 minutes he tallied 19 points, 6 rebounds, 3 assists, 0 turnovers and 2 steals.

“I thought he was awesome,” Musselman said. “Obviously defensively, he’s so hard to take off the floor. I thought offensively he was great. That was his best game as a Razorback.”

Until the next one, anyway. In Tuesday’s 75-64 victory over Florida at Walton Arena, Smith shot 7 of 9 from the field, scored 15 points, grabbed 6 rebounds, and against 2 turnovers dished 4 assists, made 5 steals, and blocked 2 shots.

“I thought late he had a huge shot in front of their bench, off a little Barkley-esque, back-you-down move, over his left shoulder with a right hook,” White said. “He was really efficient tonight.”

Musselman gushed praise, noting Smith now has healed from the injury that still pained upon his early return.

“He’s playing like a next-level player the last two games on both sides of the basketball,” Musselman said. “He came back a little early from the injury because he’s a great teammate and he cares about winning. He wasn’t fully healthy. He was cleared to play, but I think the last two games he didn’t have pain and didn’t have much swelling. He’s a dominant player right now in the SEC on both sides of the ball. He’s playing off the charts.”

Until Friday afternoon’s announcement that tonight’s Arkansas vs. Texas A&M game has been postponed because of A&M’s covid-19 issues, Smith’s off-the-charts performances against Missouri and Florida likely had him all over A&M’s charts.

Perhaps not on charts, but certainly on the boards, Arkansas alternate center Jaylin Williams looms large.

The 6-10 freshman Williams muscled a game-leading 10 rebounds against Florida.

“Phenomenal,” Musselman said. “He had four more rebounds than anybody else on the roster for us. And he did all of that in 23 minutes.”