Arkansas has weekend off after Texas A&M game scratched again 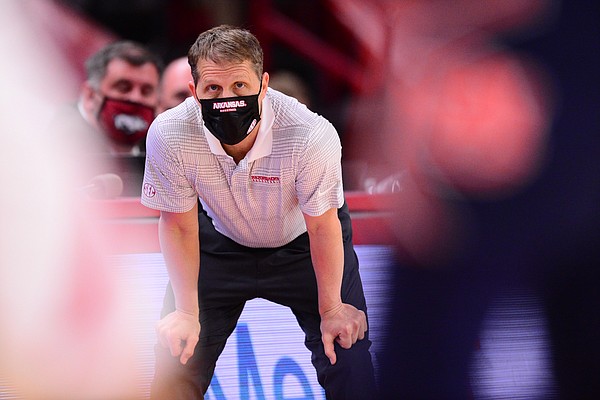 FAYETTEVILLE — The University of Arkansas and Texas A&M basketball teams tonight were supposed to play for the second time this season.

Instead the Razorbacks and Aggies haven’t played even once.

For the second time in two weeks, Texas A&M postponed a game against Arkansas because of a combination of positive tests for covid-19, contact tracing and subsequent quarantining of individuals within the Texas A&M program, the SEC office and schools announced.

It was the sixth consecutive game the Aggies have postponed — including five for covid-19 issues and one because wintry weather made travel unsafe.

Razorbacks Coach Eric Musselman said there was no advance notice from Texas A&M earlier in the week that it might not be able to play tonight.

“We found out while boarding the bus to travel to College Station today that our game tomorrow was canceled,” Musselman said in a statement released by Arkansas on Friday afternoon. “Our players are devastated that they do not get to compete.”

Arkansas’ coaching staff worked to find a non-conference opponent to play today to replace Texas A&M, but on such short notice was not able to add a game, a source with knowledge of the situation told the Arkansas Democrat-Gazette on Friday night.

The No. 24 Razorbacks’ next game will be against No. 8 Alabama on Wednesday night in Walton Arena.

Dan Leibovitz, the SEC’s associate commissioner for basketball, confirmed to the Democrat-Gazette the conference office granted Arkansas permission to seek a non-conference opponent this weekend.

Attempting to schedule a non-conference game on Feb. 6 — when the Aggies were scheduled to play the Razorbacks at Walton Arena — wasn’t an option two weeks ago because Arkansas already had played its full allotment of nine non-conference games.

But now that the math doesn’t add up for Texas A&M to make up all of its postponements with three regular-season games remaining and March 7 as the only open date for rescheduling games prior to the SEC Tournament starting March 10, allowing Arkansas to try to add a game this weekend was a logical response from the SEC office.

The problem Friday was not having enough time to schedule a game for today or finding a team so quickly agreeable to play Arkansas.

Texas A&M is Arkansas’ only SEC opponent that hasn’t been able to play the Razorbacks as scheduled.

Arkansas (17-5, 9-4) has won five consecutive games since losing at Oklahoma State 81-77 on Jan. 30. The Razorbacks have won seven consecutive SEC games overall for the first time since 2015.

Arkansas had one non-conference game postponed when Tulsa, which was scheduled to host the Razorbacks on Dec. 8, couldn’t play because of covid-19 positive tests, contact tracing and quarantining within the Golden Hurricane’s program. The Arkansas-Tulsa game game then was canceled when Arkansas added Southern to the schedule.

Because Arkansas’ coaching staff learned from Tulsa on the night of Dec. 5 — after the Razorbacks beat Lipscomb 86-50 — that the Golden Hurricane wouldn’t be able to play three days later as scheduled, the UA staff had time to schedule another game Dec. 9 against Southern, which the Razorbacks beat 79-44.