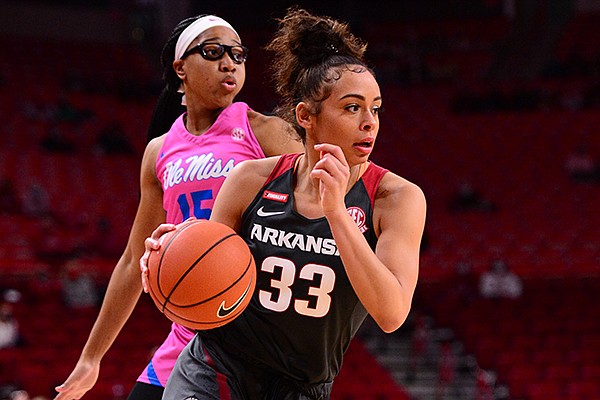 FAYETTEVILLE — No Destiny Slocum was no problem for the University of Arkansas on Friday evening.

That’s because the No. 18 Razorbacks had Chelsea Dungee.

The 5-11 senior poured in a season-high 38 points to help the Razorbacks pull away late for an 84-74 victory over Mississippi in Walton Arena.

Arkansas (16-7, 6-6 SEC) played without Slocum, the team’s second-leading scorer, because of what Arkansas Coach Mike Neighbors called a “non-covid-related illness.”

The Razorbacks stayed calm without her to turn back a fourth-quarter charge by Ole Miss and post their fifth win in the past six games.

Neighbors said they found out Slocum would not play before the shoot-around Friday. The team handled the situation perfectly, but he didn’t, Neighbors said.

“I was a little bit rattled just because we had been working on a game plan,” he said. “And then you get to shoot-around and you don’t have that game plan. I didn’t do a very good job of being prepared.

“But Chelsea and Amber [Ramirez] calmed it down. The kids were fine. It was all me. It took me some time to settle in and find some mismatches, find some driving lanes for [Dungee] to isolate and take advantage of. Once you find it, it’s just a matter of making sure you don’t do something stupid like stop going to it.”

Ole Miss opened the fourth quarter with a 9-0 run keyed by 6-5 junior Shakira Austin to get within 64-60. Dungee hit two free throws and Erynn Barnum followed with a three-point play for a 69-60 lead.

Dungee said the team came together without Slocum.

“Just this whole season with covid going on, we’ve had players in and out,” said Dungee, who scored 15 in the third quarter alone. “We realized what we had in front of us. We just stuck together and played our game.

“With them pressing a lot, you never know where the shot’s gonna come. You just kinda take what they give you. With them pressing, the lanes were gonna be wide open because there’s no help. So I kinda focused on that, getting to the rim, getting fouls.”

Dungee made 11 of 22 field goals and 14 of 17 from the free-throw line to edge her previous season best by a point. That 37-point effort came when Arkansas defeated Connecticut.

Ramirez chipped in 19 points, mainly on mid-range jumpers. The 5-9 senior, who leads the team in three-point shots, made just one in the game.

Neighbors said Dungee has come up big against tough opponents time and again in her career. Friday was no different.

“Those 38s and 41s and 37s, they’re not coming against schools that we had to pay money to come in here and play against,” Neighbors said. “These are SEC caliber … for her to do that consistently let’s not ever take it for granted.”

Arkansas made a living at the foul line, particularly in the second half. The Razorbacks made 25 of 33 free throws, including 18 of 23 in the final two quarters. Ole Miss made 18 of 28 for the game.

The Rebels also committed 19 turnovers that Arkansas turned into 26 points.

Austin registered a double-double with 17 points and 11 rebounds for the Rebels. Madison Scott, the reigning SEC Freshman of the Week, also had 17. Mimi Reid added 16 off the bench.

Ramirez used a screen and drained a pull-up jumper for a 57-47 lead late in the third quarter. Dungee knocked down a three-pointer, and Ole Miss missed at the buzzer to give Arkansas a 64-51 lead after three quarters.

Arkansas led by as many as 12 in the first quarter and had a 41-31 advantage after Ramirez’s layup with 2:18 left, but Ole Miss scored the final five points of the half.

The Rebels struggled to contain Dungee off the dribble. She poured in 18 in the first two quarters, including 5 of 6 from the foul line. Ramirez added 10.

Donetta Johnson’s rebound bucket pulled Ole Miss within 30-26, but Ramirez drained a three-pointer and Taylah Thomas got a fast-break layup to push the lead back to nine with 4:12 left in the first half.

The Razorbacks used a 12-0 run to break away from an 11-11 tie but settled for a 24-15 lead after a quarter. Ole Miss committed 10 turnovers in the first 10 minutes, which led to 13 Arkansas points. The Rebels went more than five minutes without a field goal until Tiya Douglas made a driving layup at the first-quarter buzzer.

Arkansas has a quick turnaround, traveling to Baton Rouge to face LSU on Sunday. Tip-off is slated for 5 p.m. in the Pete Maravich Assembly Center. Slocum’s status for that game is unknown, Neighbors said.