Razorbacks have record showing at Barnhill 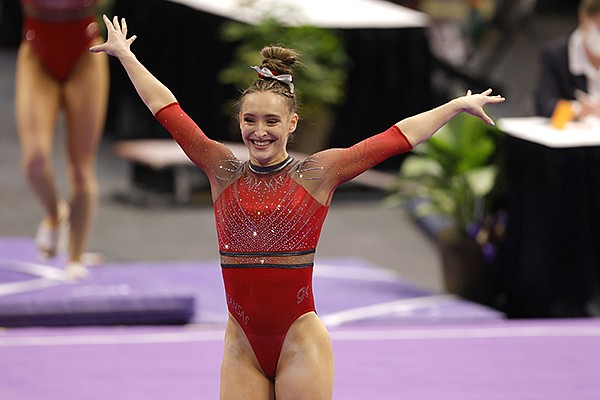 FAYETTEVILLE — The University of Arkansas put on a bounce-back performance at Barnhill Arena on Friday, acing the balance beam and floor exercise to put a bow on a school-record 197.35 to subdue No. 25 Missouri.

Missouri (1-5) led at the halfway point and finished with a season-best 196.85, but the Tigers could not keep pace with the Razorbacks’ sizzling second half.

Junior Kennedy Hambrick paved the way with a massive showing that led to a school-record 39.75 and a win in the all-around.

Hambrick won or tied for every event title, including 9.95s on both the balance beam and floor exercise, and a 9.975 on the vault after which the SEC Network announcers were wondering if a perfect 10 was in order.

Sophia Carter rebounded from a tough meet at Kentucky by scoring 9.9 on the balance beam and a 9.85 on the floor.

Arkansas was on fire in the final rotation, with senior Abby Johnston leading off with a 9.875, followed by sophomore Madison Hickey’s career-high 9.9. Sarah Shaffer (9.9) and Lovett had near-perfect tumbling runs, and Hambrick clinched the meet with her huge routine that featured big tumbling runs.

In rotation one, both teams scored season highs, with Arkansas posting a 49.35 on the vault and Missouri scoring 49.2 on the bars.

Arkansas had a couple of issues on the uneven bars in rotation two, having to count Gillian Rutz’s 9.6 after Kiara Gianfagna’s fall and scoring 49.025.

The Razorbacks took command by regaining its balance beam form and cruised to the victory from there.