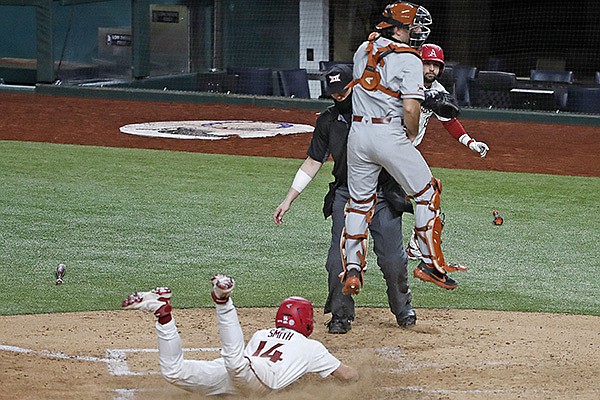 Caleb Bolden worked around a one-out hit batsman and closed out the Razorbacks' second win in Arlington.

Brady Slavens was the offensive hero with a pair of two-out RBI hits, including a three-run home run. But the bigger story was the Razorbacks' pitching staff, which recorded 15 strikeouts and allowed only two hits.

Peyton Pallette struck out eight in the start and Bolden struck out seven in four innings of relief.

The Razorbacks are scheduled to play TCU tomorrow at 6 p.m.

Arkansas stranded the bases loaded when Jalen Battles lined out to end the eighth inning. Casey Opitz singled with two outs and Cayden Wallace and Jacob Nesbit followed with walks.

Texas will send its 4-5-6 hitters to the plate in the ninth inning. Caleb Bolden will throw for the Razorbacks.

Caleb Bolden got a strikeout, a ground out and a fly out in the eighth, his third consecutive strong inning out of the bullpen. He has six strikeouts.

Bolden's pitch count is low (44) and it would not surprise to see him pitch again in the ninth.

Arkansas will send the 4-5-6 hitters to the plate in the eighth.

The inning ended when Cullen Smith was called out on a borderline 3-2 pitch away. Texas right hander Tanner Witt struck out three in the inning, which was the first appearance in his career.

Caleb Bolden will pitch again for Arkansas in the eighth.

Texas stranded its sixth runner when leadoff hitter Murphy Stehly whiffed on a 2-2 slider from Caleb Bolden. Bolden now has five strikeouts in two innings. The Razorbacks have struck out 13 Longhorns tonight.

DJ Petrinsky reached with a two-out walk against Bolden. Arkansas thought Petrinsky went around on a 2-2 slider, but it was ruled he held up. Bolden missed on a 3-2 slider to walk him.

Petrinsky has reached three times tonight. He was hit by a pitch in his first two plate appearances.

The Razorbacks stranded a runner in the sixth inning when Cayden Wallace struck out following a Casey Opitz two-out walk. Dawson Merryman got behind 3-1 to Wallace, but fought back with two good pitches.

Brady Slavens is having a heck of a game. He just hit a three-run home run to right-center field with two outs in the sixth and the Razorbacks have gone ahead 4-0.

Slavens has all 4 RBI tonight for Arkansas. Both hits came with two outs in the inning.

Slavens is a junior-college transfer whose arrival on campus was anticipated. He hit 14 home runs and had 47 RBI in 22 games last season in JUCO baseball.

Tristan Stevens' outing eroded quickly in the bottom of the sixth inning and Texas is going to the bullpen.

Christian Franklin walked and advanced to second base on a wild pitch, and Cullen Smith reached when Stevens hit him in the foot with a pitch.

Texas has gone to right hander Dawson Merryman to face Arkansas' clean-up hitter Braydon Webb. The book is still open on Stevens, who leaves the game in line for the loss.

Caleb Bolden is a potential weekend starter for Arkansas and he just made an outstanding season debut in the sixth inning. He struck out the side in 12 pitches with an electric slider.

Bolden has the stamina to potentially pitch deep into this game. If he continues to pitch like that it's a good sign for the Razorbacks.

Eleven of the Longhorns' outs tonights have been via strikeout.

The top of the Arkansas lineup is due up in the bottom of the inning.

Tristan Stevens continues to work pretty effortlessly through the Arkansas lineup. He retired the bottom of the order in six pitches in the fifth inning.

His pitch count is only at 55. He could go deep into the game at this rate.

He's not an overpowering pitcher and is getting Arkansas to hit the ball to where his defenders are positioned.

Caleb Bolden will pitch for Arkansas in the sixth inning.

Eric Kennedy flied out to center field on a 2-2 pitch to strand runners on the corners. Texas has stranded five runners tonight.

That was a good bit of pitching by Caden Monke after he thought the inning was over in the at-bat before. It would be easy to let an inning fall apart in that scenario.

The final line on Peyton Pallette: 4 1/3 innings, 0 runs, 1 hit, 1 walk, 8 strikeouts. Because he was on a pitch count, I think he is in line to be the winning pitcher.

Arkansas nearly got out of the fifth inning with a double play, but it was overturned when replay review showed Austin Todd beat the throw to first base.

Jalen Battles began the defensive sequence with a good backhand and Robert Moore turned it well. Todd was initially called out, but Texas' dugout challenged the call and won.

The overturn gave the Longhorns runners on the corners with two outs in the inning. Murphy Stehly singled in the at-bat before Todd.

Arkansas is making a pitch change with one out in the fifth. Peyton Pallette has hit his pitch count.

Pallette's eighth and final strikeout was of Cam Williams to lead off the inning, but he hit DJ Petrinsky for the second time to give the Longhorns a one-out base runner. Because of the base runner the book can't be closed yet on Pallette.

Caden Monke, who didn't record an out against two batters last night, is in the game.

Similar to Peyton Pallette in the third inning, Tristan Stevens got into some trouble when he started working from the stretch in the fourth.

Cullen Smith singled with two outs to give the Razorbacks their first base runner and Braydon Webb followed with a five-pitch walk.

Brady Slavens then hit an RBI single into right field to score Smith and give the Razorbacks the lead.

The inning ended when Casey Opitz grounded out to the first baseman.

Arkansas put a little bit of a dent in Stevens' pitch count in the inning, driving it up to 49 after he threw 33 over the first three innings.

He is still pitching to contact early in the count. Robert Moore grounded out and Christian Franklin flied out to center field to give Arkansas two quick outs in the fourth.

Peyton Pallette needed a quick inning and he got it. He needed 11 pitches to retire the Longhorns' 4-5-6 hitters and probably bought himself another inning with his pitch count now at 65.

Zach Zubia and Ivan Melendez both flied out. Sandwiched between was a strikeout swinging by Trey Faltine.

Pallette has struck out seven tonight. The top of the order is due up for the Razorbacks in the bottom of the inning.

Arkansas hasn't been able to break through against Tristan Stevens, but it's not for lack of good at-bats. Braydon Webb was robbed of a hit on a great play the Longhorns' third baseman to lead off the second inning, and shortstop Trey Faltine robbed Cayden Wallace of a hit with a good stop and whirling throw to lead off the third.

Jacob Nesbit grounded out and Jalen Battles flied out to left field to end the inning.

The Razorbacks haven't had a base runner against Stevens, who is having a lot of success pitching to contact. His pitch count is only 33 through three innings.

It will be interesting to see what kind of adjustments Arkansas might make against him the second time through the lineup.

Peyton Pallette stranded the bases loaded in the Longhorns' half of the third. He struck out Eric Kennedy — his sixth strikeout — and got Mike Antico to pop up to the shortstop in shallow left field for the final out.

Antico took a 3-1 fastball down the middle to set up the payoff pitch. Pallette had not allowed a base runner prior to the third.

His pitch count took a hit in the inning. He threw 24 pitches in the first two innings, but 30 in the third. He is on a count of around 75 tonight.

After a brilliant start, Peyton Pallette has hit some trouble in the third against the bottom half of the Longhorns' lineup.

Pallette didn't get the call on what looked like a possible strike three against eight-hole hitter DJ Petrinsky, then hit him with a pitch two pitches later. Murphy Stehly followed with a single and leadoff hitter Austin Todd drew a walk.

The Longhorns have the bases loaded with one out.

Texas third baseman Cam Williams made a great diving stop on a hot shot by Braydon Webb for the first out of the half inning. Brady Slavens followed with a foul out to the catcher and Casey Opitz got caught looking at an 86 mph breaking pitch.

Neither team has had a base runner yet.

Peyton Pallette is dialed in. He struck out the Longhorns' 4-5-6 hitters in 12 pitches in the second inning.

Pallette's fastball has been sitting at 95-96 mph consistently and he is spotting his pitches well to both sides. He has five strikeouts already.

Both teams went three up and three down in a quick first inning.

Robert Moore grounded out before Christian Franklin and Cullen Smith flied out in the bottom of the first for the Razorbacks.

Texas pitcher Tristan Stevens only had to throw 10 pitches in the inning. Peyton Pallette only threw 12 pitches for Arkansas.

If Peyton Pallette has nerves in his first start, he didn't show in the top of the first.

The right hander struck out a pair of Longhorns and got two-hole hitter Eric Kennedy to fly out. His fastball was clocked at 96 mph.

Arkansas and Texas are scheduled to throw a first pitch at 7:45 p.m. after the preceding game ran long between Texas Tech and Ole Miss.

The Razorbacks will use the same starting lineup and batting order as night's 13-9 victory over Texas Tech.

Texas will start junior right hander Tristan Stevens, who pitched two outs during a game between the Longhorns and Razorbacks in 2019. Stevens has been Texas' top relief pitcher the past two years.

The Razorbacks are the designated home team tonight.