Coach not surprised with sloppy play in opener 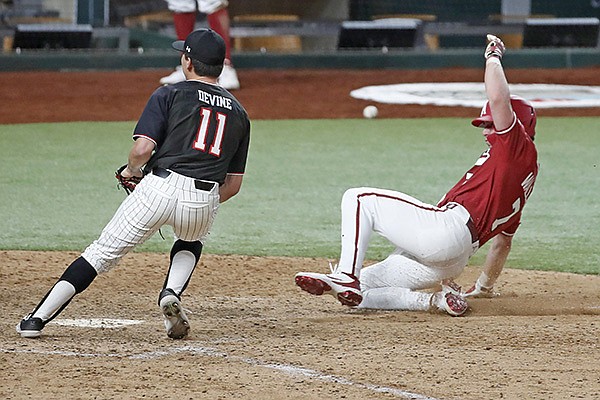 Arkansas' 13-9 victory over No. 4 Texas Tech on Saturday night at the College Baseball Showdown was not a thing of beauty for Red Raiders coach Tim Tadlock.

He also wasn’t too surprised.

The No. 8 Razorbacks scored five runs in the top of the ninth inning to win the game. Arkansas' final inning included two runs on wild pitches.

Texas Tech pitchers walked 11 batters, had six wild pitches, hit a batter and committed a run-scoring error during the game. Arkansas also scored on a balk.

“It was an opening day and a lot of crazy things usually happen on opening day,” Tadlock said. “Really proud of the guys' effort. They did everything they could to play nine innings. Obviously, there’s some fundamental things you’d like to have back. Sloppy baseball game, really.

“There were some innings that were really good, some that wasn’t so good. You can probably credit their pitchers for that. The guys, they battled — they battled the whole nine innings."

Texas Tech scored five runs in the bottom of the fifth inning to take a 5-1 lead, only to have Arkansas tie it up in the next half inning.

But the Tech relievers failed to hold other leads of 6-5 and 9-8.

“The guys were competing,” Tadlock said. "Execution wasn’t great. Timing wasn’t great. But all those guys we ran out there, we have got a lot of confidence in them.

“We really like everybody’s presence who went to the mound. But they’ve had two outings, pretty much, against hitters in (intrasquad) games this spring, maybe three. And it’s been two weeks since they had one.

“I think you saw a little bit of that today, but that’s no excuse. Arkansas did the same thing. Everybody in this tournament kind of dealt with that.”

All six teams had been forced indoors due to winter weather in recent days.

Montverde is coming back from Tommy John surgery in the spring of 2019. He had thrown just four games in two years and was on a pitch count of 75 going into the game. He threw 64 pitches.

“He threw the ball well,” Tadlock said. “His pitch count got a little high. Arkansas did a great job of fighting some pitches off and kind of put us in a position where for the long haul it was the right thing to do, was to get him out of there."