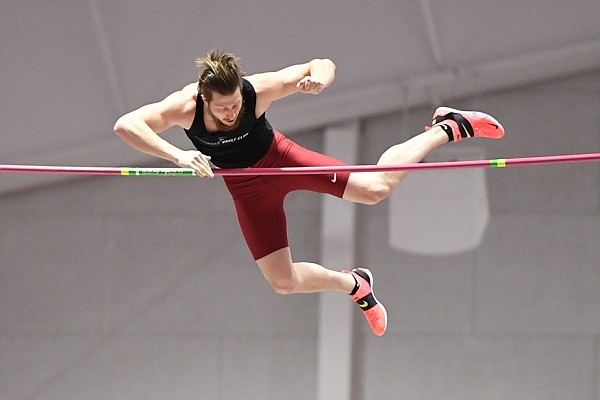 “I was just happy to have a meet, to be honest,” said Irwin, who lives in Mount Ida. “It’s been over a year since I had a real meet. We had a couple little meets down at our place [the Arkansas Vault Club in Black Springs] back home, but nothing crazy.”

American record-holder Sam Kendricks, a nine-time U.S. champion and the 2016 Olympic bronze medalist, planned to compete Sunday, but weather issues prevented him from traveling to Fayetteville.

“With the snow we’ve had this week, I haven’t really done a whole lot,” Irwin said. “It’s been hard to get out and get to the places I need to be.

Zachary Jewell, a former sprinter at the University of Central Arkansas, won the 60 meters in a personal-best 6.58. He fell after crossing the finish line and came up limping.

Jewell, who is from Mena, bettered the personal-best of 6.59 he ran in having the fastest time in the preliminary heats.

Ryan Crouser, the 2016 Olympic shot put gold medalist who trains in Fayetteville and is a volunteer coach for the Arkansas men’s team, won Sunday’s competition despite being weakened by food poisoning.

“I felt like I was in a good place to break my indoor world record, but then Friday night I got food poisoning,” Crouser said. “Pretty much spent the next 24 hours in the bathroom.

Crouser became so ill that he said he lost 15 pounds.

“I was 316 on Friday, and then I was 301 this morning,” he said. “So I lost some weight, but I still was able to throw a competitive, far distance feeling bad. So that was good. That was kind of the best I could hope to do today.”

Megan Clark, a former Duke All-American who trains in Fayetteville, was second at 14-11 and former Razorback Megan Zimlich took third at 14-1 1/2, Lauren Martinez, who has outdoor eligibility remaining for Arkansas, was fifth at 13-7 1/2.

Sprinter Allyson Felix, who individually has an Olympic gold medal, three silver medals and one bronze as well as five relay gold medals, ran a 200 indoors for the first time since 2003 and won in 22.59. She also took second in the 60 in 7.28 behind Great Britain’s Daryll Neita, who won in 7.24.