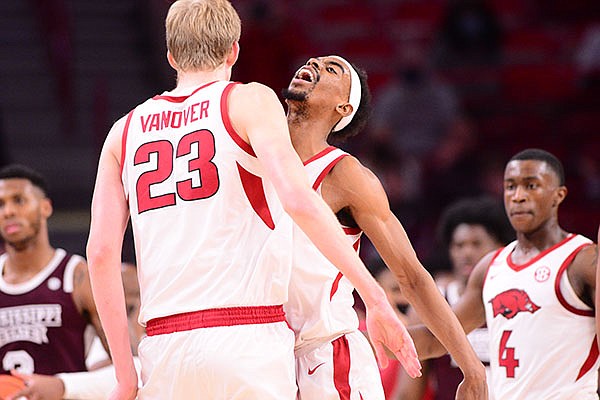 The Razorbacks are gearing up for their biggest game of the season and the program’s most anticipated game in years. Arkansas hosts Alabama on Wednesday for an 8 p.m. tip on ESPN2 in the first matchup of Associated Press Top 25 teams in Bud Walton Arena since 1998.

Here is an in-depth look at each team:

Eric Musselman’s team has not played since last Tuesday, meaning it will have one week between games thanks to covid-19 issues at Texas A&M. In his college coaching career, Musselman is 21-0 at home following four-plus days off and 27-1 overall in the last four seasons.

The lone loss came on a neutral floor to Florida in the 2019 NCAA Tournament.

It is middle of the pack in offensive efficiency in SEC games (103.9) but No. 3 on the other end (99.0), trailing only Alabama and Tennessee. During the Razorbacks’ conference winning streak, they have scored at a 1.03 point-per-possession rate and allowed .90 PPP.

According to ShotQuality.com, Arkansas has a 53% chance to beat the Crimson Tide, and the site is projecting an 86-84 win for the Razorbacks.

In ESPN bracketologist Joe Lunardi’s latest NCAA Tournament projection the Razorbacks are a 6 seed facing the winner of the Indiana-Xavier 11 seed play-in game. In this scenario, a second-round matchup with Oklahoma is a possibility.

The Crimson Tide will enter Wednesday’s game in sole possession of first place in the SEC at 13-1. Their only loss in conference play came at Missouri on Feb. 6. Since, they have won three consecutive games over South Carolina, Georgia and Vanderbilt.

Alabama’s identity is clear: Shoot threes and layups, and lock up defensively.

In the last 10 SEC games, Alabama has taken only 26 shots that were not either a three-pointer or in the lane. The most such shots the Crimson Tide took in a game in that span was five at Missouri. They attempted two in the 90-59 win over Arkansas last month and made both.

Alabama is averaging 74 possessions per game this season and is second in the country in average time of offensive possession at 14.1 seconds, per KenPom. Nearly 48% of its shot attempts come from beyond the arc.

In SEC games, Alabama has shot 39.4% from three-point range and is playing at an even faster pace — 77.1 possessions per game. Conference opponents have struggled from distance against the Crimson Tide, hitting just 25.5% of their looks.

They have given up more than five threes only six times in 2021.

Jaden Shackelford leads Alabama in scoring at 14.5 per game, and Herbert Jones leads the team in rebounds, assists, steals and blocks per game. Jahvon Quinerly, John Petty, Joshua Primo and Jones are all shooting at least 38% from three this season.

According to Lunardi, the Crimson Tide are a 2 seed matched up with UMBC.

• Moses Moody and Connor Vanover have combined to make 14 of 31 catch-and-shoot three-pointers over the last four games. The rest of the team is 6 of 37.

• Opponents are 13 of 59 (22%) from the floor the last eight games with Moody as the nearest defender.

• Justin Smith scored three times on four shots in post-up action against Florida. Vanover has the only other post-up score since the home win over Mississippi State.

• Four of Davonte Davis’ seven buckets against the Gators came in transition. He has five transition scores on seven attempts the last four games. Smith is second in that span with three.

• Smith is averaging a career-high 2.8 assists in February. The most assists he averaged in a month in three seasons at Indiana was 1.2. This season, he averaged 1.5 in November and 2.2 in January. In SEC play, Smith is third on the team in assists with 19. Only Jalen Tate (55) and Davis (25) have more.

• During Arkansas’ seven-game SEC win streak, lineups featuring Moody, Tate and Davis have allowed .78 points per possession over 169 defensive possessions, according to HoopLens, and scored at a 1.11 PPP rate.

• With Smith and Jaylin Williams sharing the floor against Florida, the Gators scored .63 PPP over 41 possessions, per HoopLens. In the last seven league games, opponents have scored .90 PPP and shot 43.6% inside the arc in 149 possessions with those two in the lineup.

The 6-10 former Yale standout injured his right knee in the Crimson Tide’s win at Kentucky on Jan. 12 and missed nine games. He started Saturday vs. Vanderbilt and finished with 1 point, 6 rebounds, 1 assist, 1 block and 1 steal.

“Bruner’s a really good player,” Musselman said Monday. “(He is) obviously a player that we recruited. He can knock down threes, he’s a very good rebounder, he’s an active player. Another senior to add with the guys that have been there for four years.”

• Arkansas is also expected to floor a healthier group than in the teams’ first meeting. Smith started against the Crimson Tide just 15 days after ankle surgery and was rusty, finishing with 5 points and 3 turnovers in 18 minutes.

He has scored in double figures in seven of eight games since and played two of his better games as a Razorback against Missouri and Florida, averaging 17 points, 6 rebounds, 3.5 assists and 3.5 steals.