'It is an Omaha-contender pitching staff': Hogs dazzle on mound over 2 days in Texas 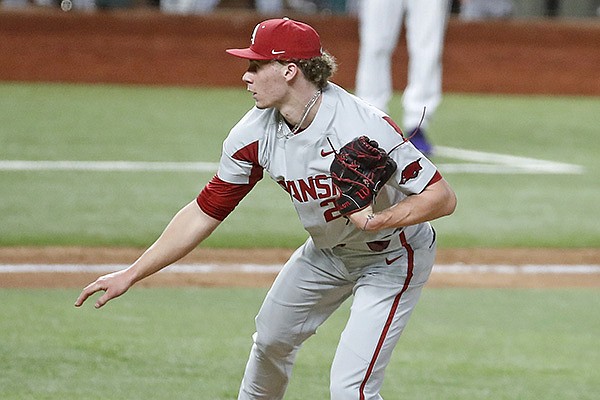 Arkansas pitcher Jaxon Wiggins throws during a game against TCU on Monday, Feb. 22, 2021, in Arlington, Texas.

According to third-year Arkansas pitching coach Matt Hobbs, the ideal number of starters on a pitching staff is six.

It was telling when, a few days before Arkansas began its season at the College Baseball Showdown, Hobbs rattled off a list of nine Razorbacks with starting potential.

Not all can start a weekend series, meaning several will factor into Arkansas’ bullpen on the weekends. It also gives Arkansas options once midweek games begin, when teams play up to five games in seven days.

“You’ve got a bunch of those dudes who have thrown the ball really well and who we’re excited about,” Hobbs said last week. “It’ll be interesting to see how it shakes itself out.”

Over three games in Arlington, Texas, the Razorbacks’ depth was on full display. And in Arkansas’ final two games at Globe Life Field, the pitching staff showed out.

Against two teams ranked in the top 11 of the preseason USA Today Baseball Coaches Poll, and with most pitchers making their first appearance of the season, the Razorbacks put together what has to be one of the best two-day pitching performances in program history.

One day after allowing 2 hits and striking out 15 Texas batters, Arkansas allowed 2 hits and struck out a school-record-tying 18 TCU batters in a 4-1 victory over the Horned Frogs.

And for such great power numbers, the Razorbacks’ pitching mistakes were minimal. Over 18 innings, Arkansas walked only six batters.

“It is an Omaha-contender pitching staff,” said Jim Schlossnagle, the TCU coach who has led the Horned Frogs to the College World Series five times.

The Razorbacks’ depth was most evident when freshman right hander Jaxon Wiggins made an eye-popping debut by striking out the Horned Frogs’ 3-4-5 hitters with ease in the sixth inning.

Wiggins was clocked on at least one pitch at 98 mph and he complemented his fastball with good off-speed pitches.

“What was he, like their 10th guy out there this weekend?” Schlossnagle said. “They run him out there for one inning and he was throwing almost 100 mph with a good slider. It looked like they were having tryouts over there or something.”

It wasn’t a perfect weekend for Arkansas pitching. The Razorbacks gave up 9 hits, walked 7 batters and hit 3 others against Texas Tech in the season opener Saturday night.

Arkansas’ bats picked up the team in that game. The Razorbacks scored five runs in the top of the ninth to defeat the No. 4 Red Raiders 13-9.

But beginning with the 4-0 win over the No. 10 Longhorns on Sunday, there was little to complain about with Arkansas’ pitching.

Peyton Pallette struck out 8 in 4 1/3 innings and Caleb Bolden struck out 7 in 4 innings against Texas. Caden Monke worked around a jam to record two outs in between.

Bolden is one of the many arms with starting stuff in the bullpen, and could potentially be in the rotation when the Razorbacks play four games against Southeast Missouri State beginning Thursday.

Transfer Lael Lockhart got the Razorbacks off to a strong start against No. 11 TCU when he struck out 8 in 4 1/3 innings. The Horned Frogs scored their only run against Lockhart on a bloop single with two outs in the second inning.

From there it was a pitching clinic:

• With a TCU runner aboard and Arkansas trailing 1-0, left hander Evan Taylor needed two pitches to get two-hole hitter Tommy Sacco to ground into a 6-4-3 double play to end the fifth inning.

• Wiggins struck out the heart of the Horned Frogs’ lineup in the sixth, recording 12 strikes on the 15 pitches he threw.

• Junior-college transfer Ryan Costeiu, a right hander, struck out two batters and ended a perfect seventh inning with a fly out.

• Sixth-year right hander Kevin Kopps struck out 5 over 2 innings, and worked around 2 base runners in the ninth to bounce back from a rough outing against Texas Tech.

“I think it was about getting our feet underneath us and building a little bit of confidence and believing in ourselves,” Kopps said. “We were just able to stop the bats when we needed to stop the bats and roll down the hill after that.”

Perhaps most telling for Arkansas’ depth is that two of its most experienced pitchers — third-year sophomores Patrick Wicklander and Connor Noland — did not appear in its three games in Arlington. Wicklander and Noland were the team’s top two starters at the time last season was suspended.

They have been passed in the rotation — at least for now — and are relievers. Wicklander warmed up late in the Texas Tech game and Noland was warming up when Kopps recorded the final out against TCU.

“Everybody knows what Pat and Connor are capable of, because we’ve all seen them do it in their careers,” Hobbs said last week. “Right now you have a really talented pitching staff where everybody is pushing everybody, and some other guys have pushed to the front.”