State of the Hogs: All gas, no brakes 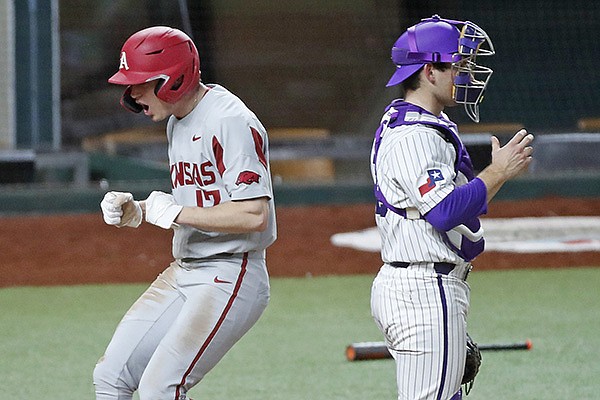 College baseball rankings don’t matter in February. Tell yourself that over and over.

You can’t get to Omaha for the College World Series based on winter happenings.

But don’t tap the brakes after Arkansas went 3-0 at Globe Life Field the past three days during the College Baseball Showdown in Arlington, Texas.

That was the way D1Baseball analyst Mike Rooney looked at the way the Razorbacks played in sweeping Texas Tech, Texas and TCU.

“You shouldn’t pump the brakes (on Arkansas),” Rooney said. “That’s an awesome team.”

I’m going to mix polls here just for the sake of the Rooney radio interview Tuesday morning on the Morning Rush.

The USA Today Coaches Poll is used as our publication's rankings of record, just to keep it simple. Arkansas was ranked No. 8 in that poll in the preseason, but coaches won't vote again until March 8. The coaches poll will update weekly following the third weekend of the season, when a more complete picture is available of all teams.

Other polls have already updated, including D1Baseball's poll. Not surprisingly, the D1Baseball update has Ole Miss (3-0) ranked No. 1, followed by Arkansas at No. 2 and Vanderbilt (2-0) at No. 3.

Mississippi State (2-1) is fifth despite losing to TCU in Arlington.

Rooney, who also is a contributor at ESPN, loves the Razorbacks. He picked them as his CWS champion in the preseason while most everyone else was picking Florida.

The Gators were a unanimous preseason No. 1 in the polls, but slipped after losing a series to Miami to open the season.

It sounded like Rooney just wanted to be different when he was asked about his pick Tuesday.

“I didn’t want to pick Florida,” Rooney said. “Now, they are good.”

But so are the Razorbacks.

“I love ‘em,” Rooney said. “They are so good up the middle with Casey Opitz at catcher, Robert Moore at second and Christian Franklin in center field.

“They have four preseason All-SEC picks as position players. That’s unheard of.

“Pitching was a concern after Connor Noland and Patrick Wicklander struggled in the fall, but the pitching began to have clarity (in January) when you read what Dave Van Horn was saying.

“There is depth to this staff and I think the bullpen is going to be suffocating. Dave Van Horn’s track record is off the charts. He’s won at every level. What he did at Nebraska is one of the great turnarounds in college sports.

“What you have in Dave is intensity, but it’s not at the level that he makes players play nervous or coaches coach nervous. He lets his coaches coach. Arkansas has become a monster.”

The word around college baseball is that Van Horn and his staff are recruiting at a monster level.

“What they are doing in college baseball in recruiting is on the level of what Alabama, Clemson and Georgia are doing in football,” a trusted baseball source said. “No one they offer is saying no. They are getting everyone they ID as a prospect, and that’s all over the country now.

“They have great coaches, great facilities, a great culture and DVH is masterful in how he has constructed all aspects of the program. It’s impressive. Parents are impressed and that’s important when you are recruiting 10th graders. That’s where college baseball is at now.”

Rooney thinks it is only a matter of time before Arkansas wins a national championship.

The trick will be just to survive the SEC West. It could be that five or six teams from the West host NCAA regionals, some as national seeds that would be in line to host a super regional, too.

“The three teams (in Arlington) all have a chance to win the West,” Rooney said of the Hogs, Rebels and Bulldogs. “What you have to do is be one of those final two in the West (standings) and you will (host a super regional). That’s easy to say, but tough to do.

“All three of those are good, and LSU is good, too. I just don’t think LSU is quite on the same level as those three.”

Scouts who saw Arkansas in the fall are not surprised. One veteran watched the team’s fall series and said “it was like watching an NCAA regional. Both teams could probably make a regional.”

The problem for Van Horn is sorting out all of the talented pieces. He did not call on two of his veterans to pitch in Arlington. Neither Connor Noland nor Patrick Wicklander got in a game, although both warmed up — Wicklander at the end of the Texas Tech game and Noland at the end of the TCU game.

Noland was ready if Kevin Kopps faltered Monday. Noland and Wicklander may get starts this week in a four-game series against Southeast Missouri State.

There may be eight or nine pitchers on the staff capable of starting. The key might be what Van Horn wants to do at the back end of the bullpen.

One fascinating piece of the staff emerged in the middle of the TCU game when Van Horn gave one inning to true freshman Jaxon Wiggins.

At 6-5, 220 pounds, Wiggins is an imposing figure on the mound. The right hander from Roland, Okla., touched 98 mph on the radar gun while mowing down three straight in the heart of the Frogs' order in the sixth inning. He threw only 15 pitches.

The Wiggins motion looks effortless. Most expect him to top 100 mph when the weather warms. Pitchers usually gain velocity as the season progresses.

TCU coach Jim Schlossnagle had the best line on what he saw from the UA staff on the weekend.

“It looked like they were having tryouts over there," Schlossnagle said.

That’s a suggestion that the Hogs are loaded with pitching talent.

Among the pitching highlights had to be what Peyton Pallette and Caleb Bolden did in a 4-0 shellacking of Texas. Pallette fanned 8 in 4 1/3 innings and Bolden struck out 7 in a 4-inning save.

Bolden retired 12 of 14 batters faced. He’s likely to move into the starting rotation against SEMO.

The Hogs won despite struggles at the plate at the top of the lineup. Moore and Franklin, batting 1-2, both hit .167. However, Franklin hit the RBI triple in the eighth to tie the TCU game in the eighth inning, and scored the go-ahead run.

Those two won’t struggle forever. They are elite hitters.

So is newcomer Brady Slavens, the national junior college player of the year last year at Johnson County (Kan.) Community College. Slavens got the start at designated hitter with Matt Goodheart home sick.

Slavens knocked in all four runs in the victory over Texas, most of them with a three-run homer in the sixth inning. He led the Hogs with a .417 average for the weekend.

Van Horn left Arlington contemplating how to get Slavens into the lineup when Goodheart returns as the DH. Goodheart is unlikely to play in the field because of a rebuilt throwing shoulder.

Slavens has worked at first base, outfield and third base while at Arkansas. He was mostly used at third base in the fall and then given practice time at first after the Christmas break.

A college baseball observer who had seen Slavens at Wichita State two years ago and in junior college last year said, “Slavens will hit at this level, maybe with big-time power. He has a powerful swing.”

He embodies the signs that are plastered throughout Arkansas' dugout: All gas, no brakes.

That was obvious at Arlington. The 6-3, 195-pounder from Olathe, Kan., takes big cuts. The son of a pair of ministers seems to want to hit it hard every time he unleashes that lefty bat.

Is he as good as he looked in Arlington? Maybe he is, especially if he doesn't tap the brakes.