Tate bounces back after time on bench 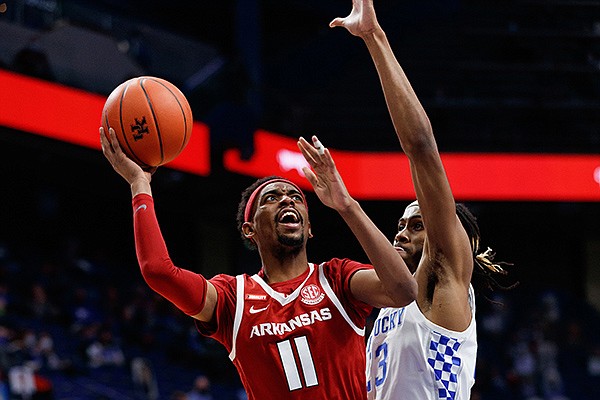 FAYETTEVILLE — University of Arkansas guard Jalen Tate watched the final 4:43 of the Razorbacks’ 81-77 loss at Oklahoma State on Jan. 30 from the visitor’s bench in Gallagher-Iba Arena.

Arkansas Coach Eric Musselman made the decision it would be better to replace Tate — a fifth-year senior graduate transfer from Northern Kentucky — with freshman Davonte Davis with the game tied 71-71.

“I just didn’t think Jalen had it at all,” Musselman said after the game. “As far as our coaching staff was concerned, that was definitely the right move [to go with Davis] the way Tate was playing.”

Tate reflected Monday on his performance at Oklahoma State.

“I wanted to be out there to be able to help my teammates, honestly,” Tate said. “It’s not every day that one of your leaders or vets has to be sat down for the stretch. I completely take all the blame for that.

“I’m not sure so much if I wasn’t ready to play, but I know I wasn’t making enough plays at the time.

“I had to be able to put that behind me and realize that I can’t do that again. I can’t have a lapse like that as a leader of this team. I want to be there and win every single game we’re put in.”

“I think you can argue that I’ve been better, but I still don’t think I’m showing everything that I can really do or doing everything in my power,” Tate said. “It’s been good to put it behind me and be able to get wins now.

Musselman kept Tate in the starting lineup after the Oklahoma State game.

“I think he’s had a great year, I really do,” Musselman said. “Sometimes you have bad games, and that’s just part of basketball.

Tate found himself back on the bench in the second half against Florida, but it was because he picked up his third foul with 16:50 left.

Florida had the momentum, continued its comeback and took a 62-61 lead with 4:40 left on a basket by former Jacksonville standout Tyree Appleby.

Davis put Arkansas back in front 63-62 with a driving basket.

Tate hit a jump shot to make it 65-62, drew a foul and hit 1 of 2 free throws. He then made a steal that led to two free throws by Moses Moody as the Razorbacks closed the game on a 14-2 run.

“He’s like the head of the snake for us,” Davis said of Tate. ‘When he’s rolling, we’re all rolling.”

Senior forward Justin Smith said Tate is a calming factor for the Razorbacks.

Tate said he had confidence in his teammates while sitting out and that basketball is a game of runs.

“I felt like I let my team down a little bit getting into foul trouble,” he said. “I can’t put myself in those positions, especially down the stretch last week or in the postseason.”

“All those things I think are really important, other than just scoring the basketball. Even being a player that’s willing to be a decoy in a play, or setting weak-side pairs action to get a teammate a shot.

“Being vocal in a timeout, and giving feedback and input to his teammates as well as the coaching staff.”

Tate was the Horizon League defensive player of the year last season. For the Razorbacks, he always draws the opponent’s top perimeter player.

“Your shots can feel amazing, but they’re not going to go in, or it might not be your night,” Tate said. “It might be someone else’s night. So you’ve got to work to get them the ball a little bit, especially as a point guard.

“But defensively I can always take on the best assignment and know that I can do whatever it takes to control how many shots they get. Contest it every single time. Take a charge. I feel like on the defensive end, I can really impose my will.”

“Being a senior and being a player that’s been through injuries, rehab and come back [at Northern Kentucky], I think he’s got great mental toughness,” Musselman said. “When you lose a game or you have a bad game or you’re in a shooting slump, you’ve got to figure out a way to mentally bounce back as quick as you can so it doesn’t linger.”