Bolden will get ball first for Hogs vs. SEMO 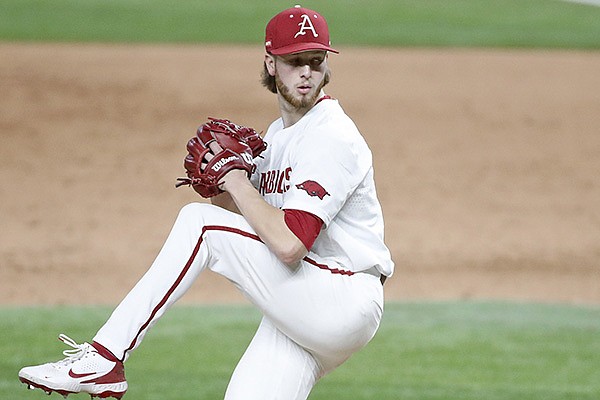 Arkansas pitcher Caleb Bolden throws during a game against Texas on Sunday, Feb. 21, 2021, in Arlington, Texas.

Bolden, who was named SEC co-pitcher of the week Tuesday, earned a four-inning save during Arkansas' 4-0 victory over Texas last Sunday. Bolden allowed two base runners on a walk and a hit batter, and struck out seven Longhorns.

It will be Bolden's seventh career start. He started four times as a freshman in 2018, and twice last season as a redshirt sophomore after returning from Tommy John surgery.

The No. 8 Razorbacks (3-0) plan to start their previous weekend's rotation for the other three games — right hander Zebulon Vermillion on Friday, right hander Peyton Pallette on Saturday and left hander Lael Lockhart on Sunday. All three took no-decisions in their first start of the season.

Pallette and Lockhart each struck out eight batters in 4 1/3 innings against Texas and TCU, respectively. Pallette allowed a hit and a walk, but did not allow a run against the Longhorns. Lockhart allowed 1 run, 2 hits and 2 walks against the Horned Frogs.

Vermillion allowed 2 runs on 3 hits and 2 walks in a 4-inning start against Texas Tech. Vermillion struck out four Red Raiders.

Niznik took a no-decision while pitching 5 1/3 scoreless innings in the Redhawks' 6-5 loss to South Alabama in Game 2, but struggled some with command. Niznik walked four, threw two wild pitches and hit a batter.

Vogt pitched three innings in the finale, which SEMO won 8-6 in 10 innings. He allowed 2 runs on 2 hits and 3 walks.