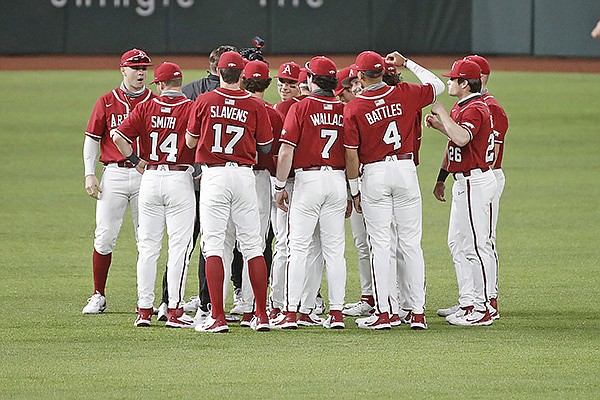 Arkansas players huddle prior to a game against Texas Tech on Saturday, Feb. 20, 2021, during the College Baseball Showdown at Globe Life Field in Arlington, Texas.

FAYETTEVILLE — Dave Van Horn would have been OK with any combination of wins and losses by his No. 8 University of Arkansas baseball club in the season-opening College Baseball Showdown in Arlington, Texas.

That’s probably not true. The 19th-year coach of the Arkansas Razorbacks could have tolerated whatever came of his club’s three-game set vs. No. 4 Texas Tech, No. 10 Texas and No. 11 TCU.

That the Razorbacks went 3-0 against those powerhouses, displayed magnificent pitching with back-to-back two-hitters on Sunday and Monday, and flashed just enough late offense in all three games made the lessons learned at the Texas Rangers’ new Globe Life Field much easier to digest.

“If you lose, it’s not the end of the world because you have your whole season,” Van Horn said late Monday after the Razorbacks rallied in the final two innings to down TCU 4-1. “But what you learn from these tournament games — especially one this good to start the season — is what you need to work on.

“And we learned a lot about our toughness and a little bit of how we’re going to handle our pitching. Just that the team likes to play. Winning three games, that’s great because any win you can grab with the schedule we’re playing this year is a good thing.”

“I think the way all three of these games were won really helped both the hitters and the pitchers jell together and get a lot of the team chemistry going,” Kopps said. “Kind of us fighting to the finish together a little bit.”

The Razorbacks took their sweet time offensively in each of the three games, scoring two runs in the first five innings combined and 19 runs from the sixth inning on, including seven in the ninth innings. Arkansas did not score in the first three innings of any of the games.

“That says something similar to the team we had in 2019, my freshman year,” junior Christian Franklin said of the late rallies. “We had a good mix of younger guys and older guys, and we pulled for each other and we have that on this team.

“We care about each other, and coming back in the late innings … shows we’re never out of it and our coaches do a good job keeping us fired up.”

Van Horn referenced an unrelenting schedule featuring SEC road series at Ole Miss, which also went 3-0 in Arlington, Mississippi State (2-1 in Arlington) and LSU. Those set up as stiff challenges down the road.

In the here and now, the Razorbacks return home to host Southeast Missouri State for a four-game series starting Thursday at 3 p.m. at Baum-Walker Stadium. The Redhawks — coached by Van Horn protege Andy Sawyers, and featuring former SEMO and Arkansas standout Trevor Ezell as a volunteer coach — opened the season by winning two of three games in a hastily scheduled series at South Alabama.

Both teams must map out a plan to guide a pitching staff through 36 or more innings, weather permitting, while still working on relatively modest pitch counts. Arkansas is also dealing with a shorter-than-normal turnaround because the last weekend’s event was pushed back a day to a Saturday start.

For instance, to give potential starters Zebulon Vermillion (0-0, 4.50 ERA, 4 innings) and Peyton Pallette (0-0, 0.00, 4 1/3 innings) even five days rest, those two right-handers would not be available until Friday and Saturday, respectively. Typically in midseason, starting pitchers get six or seven days rest between games. Van Horn said Caleb Bolden (0-0, 0.00, 1 save, 4 innings), the SEC co-pitcher of the week, earned himself a start, but he threw 56 pitches in Sunday’s 4-0 win over Texas.

Van Horn and pitching coach Matt Hobbs are clearly intrigued by the idea of starting freshman righty Jaxon Wiggins, who touched 98 mph on the radar while striking out the side in his one inning Monday.

“It was about as good as it could go,” Van Horn said. “He’s throwing the ball extremely hard, and he threw some plus changeups. Just really happy for him because he’s got a special arm.

“He’s got a big body, he’s strong and I don’t think he gets rattled. He proved to us and his teammates that he deserves the ball as a starter and in tight situations as a closer, so we’re excited he’s with us.”

TCU Coach Jim Schlossnagle, who has guided the Horned Frogs to five College World Series, said Arkansas has an “Omaha-contender” pitching staff, with the 6-6 Wiggins being a good example.

“What was he, like their 10th guy out there this weekend?” Schlossnagle asked. “They run him out there for one inning, and he was throwing almost 100 mph with a good slider. It looked like they were having tryouts over there or something.”

Then there are veterans Connor Noland and Patrick Wicklander, weekend starters in 2019 and 2020, who were not among the Hogs’ 11 pitchers used in Arlington.

Noland and 6-4 right-hander Evan Gray were up in the pen late Monday, as Kopps walked two Horned Frogs in the ninth before closing it out. Sophomores Blake Adams and Zack Morris and others also were ready and waiting on the deep staff.

“We had some good arms out there that haven’t thrown yet,” Van Horn said. “ Noland, Morris. We’ve got Adams, Gray. All these guys, I mean you haven’t seen them, but they’re pretty good.”

Van Horn was asked about the difficulty of choosing four starters for the SEMO series.

“I like having some decisions to make,” Van Horn said, laughing. “That’s good. Wiggins is a guy we almost started here, but we also could use him as a closer for a while.

“What can you say about Bolden? He was outstanding [Sunday]. I think he went four innings and didn’t give up a hit. Bolden’s another guy. He was the hardest conversation that Coach Hobbs had with pitchers on starting. It was great to just see what he could do, and he did it.

“Yeah, it’ll be interesting. We have two days, and then we have four games in a row Thursday through Sunday. So we’re going to have to figure out how we’re going to handle this, and some guys are going to get the ball this week.”

The Razorbacks came out of the showcase series with a 3.33 ERA, with most of the damage being incurred in the 13-9 win over Texas Tech in the opener. Over the final 20 innings, Arkansas pitchers faced 75 batters and allowed 1 run on 4 hits — all singles — 7 walks and 5 hit batsmen with 35 strikeouts. Arkansas pitchers struck out 15 Longhorns and 18 Horned Frogs to cap the tournament.

The Razorbacks put together a .237 team batting average against a high-caliber set of arms, with just four extra-base hits: Brady Slavens’ three-run home run against Texas; Franklin’s triple on Monday; and doubles by Battles and Casey Opitz.

Van Horn figures the Razorbacks can put together a salty lineup. After Sclossnagle suggested these Hogs could be harder to pitch against than the 2019 team that beat TCU twice in the NCAA Fayetteville Regional, Van Horn said he’d need more time to digest that hypothesis.

“I just have to see it a little bit longer,” Van Horn said. “If you put [Matt] Goodheart in there and we make a move here or there, it can be deep. Right now we have a couple of guys who aren’t swinging it real well.”