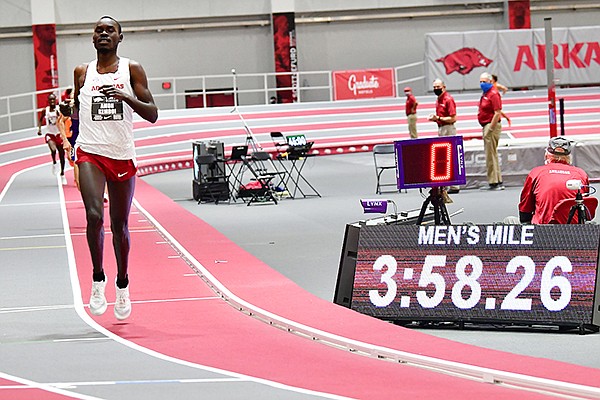 FAYETTEVILLE — LSU and the University of Arkansas are ranked No. 2 and 3 nationally in men’s indoor track and field behind No. 1 Oregon.

The Razorbacks hope to swap places with the Tigers atop the final standings when the SEC Championships are held today through Saturday at the Randal Tyson Track Center.

“I know they’re gunning for us. They’ll certainly be one of the teams we have to contend with.”

Other SEC teams Arkansas has to contend with this weekend are No. 8 Florida, No. 9 Georgia and No. 10 Ole Miss among nine conference teams ranked in the top 25.

“It’s going to come down to great racing, great competition,” Bucknam said. “We’re going to have to be dialed in if we want to be able to take the meet.

“But I would have to think everybody’s pointing toward us. We just have to prove it.”

Arkansas’ conference leaders going into the meet are Amon Kemboi in the 5,000 meters, Kieran Taylor in the 800 and Markus Ballengee in the heptathlon.

The Razorbacks have three of the top six scorers this season in the heptathlon — which begins today along with the distance relay and weight throw — with Ballengee at No. 1, Etamar Bhastekar No. 4 and Daniel Spector No. 6. Ballengee was second in the heptathlon at last year’s SEC meet.

“I’m really excited to watch them compete,” Bucknam said. “They really look fresh. We’re expecting big things out of that group as a whole.”

The Razorbacks also are expecting big things out of Kemboi, who will double in the 5,000 and 3,000, where he has the second-fastest time in the SEC this season.

Arkansas has the top four times in the 5,000 with Gilbert Boit, Jacob McLeod and Young second through fourth. They also will double in the 3,000.

The Razorbacks’ top scoring threats in the sprints include Phillip Lemonious, Carl Elliott and Tre’Bien Gilbert in the 60 hurdles; Roman Turner and Kris Hari in the 60; and Jalen Brown in the 200 and 400.

In addition to winning the SEC cross country title last fall, the Razorbacks beat every SEC team they competed against in five regular-season meets. They won three meets, and in two others finished second to Oregon — ranked No. 1 nationally — and Texas.

“We didn’t set up our lineup to win the meets, but we felt like how we competed as a team was important,” Bucknam said. “Track and field, we need more winners than losers.

“When you look at the teams that came into our facility, we beat 95% of them, and that tells a story. I think it’s really important. We don’t [score meets] enough.”

The SEC always keeps score for its meet, and the Razorbacks have won 23 indoor titles in 30 years.

“Winning the SEC championship, there’s nothing like it,”Bucknam said. “We put a lot of emphasis on this meet.”