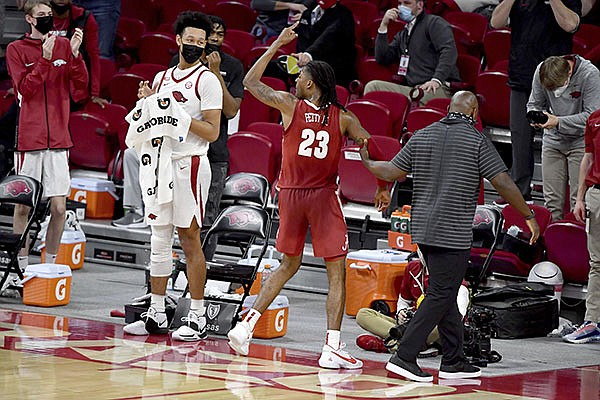 Alabama guard John Petty Jr. (23) gestures as he is escorted off the court after being ejected during the second half of the team's NCAA college basketball game against Arkansas in Fayetteville, Wednesday, Feb. 24, 2021. (AP Photo/Michael Woods)

FAYETTEVILLE — Nobody has handled No. 6 Alabama in SEC play like the University of Arkansas did on Wednesday at Walton Arena.

The No. 20 Razorbacks beat a second top 10 team this season for the seventh time in school history with an 81-66 victory over the Crimson Tide, which are on the brink of winning the SEC championship.

Arkansas prevented Alabama from taking the outright regular-season title with a big surge early in the second half after Alabama built a 45-39 lead.

Alabama had two key players foul out in forward Herbert Jones and guard Jaden Shackelford, and tensions ran high with John Petty being ejected along with Arkansas guard Jalen Tate with 1:01 remaining.

Petty was ejected by referee Doug Shows when he picked up his second technical foul of the game seconds after fouling Moses Moody.

Petty appeared to bump Shows on his way off the floor and traded verbal jabs with members of the Arkansas bench before order was restored.

Arkansas freshman Jaylin Williams came alive in the second half, scoring eight of nine points for his team during a stretch of two-and-a-half minutes after Alabama had built its largest lead at 45-39.

Williams made a layup and a jump-hook on back-to-back possessions, then his turnaround jumper after a Moses Moody free throw put Arkansas back on top at 46-45.

The Tide reclaimed the lead on a John Petty step-back jumper, but Williams took it back with a pair of free throws at 14:47.

Williams made 4 of 8 field goals in the second half, grabbed all 8 of his rebounds after intermission and finished with 13 points.

Justin Smith was the recipient of some scrappy floor work by the Hogs midway through the second half.

Moses Moody went to the floor to grab a loose ball with hands from various Alabama players jabbing at the ball. Moody shoveled a short pass to Jalen Tate, who saw Smith streaking to the hole and fed the 6-7 forward for a two-handed dunk at the 12:01 mark for a 52-47 Arkansas lead.

Smith also put in work for his first field goal a little earlier, hustling down the floor to tip in a missed layup in traffic by Moody at 13:39.

Arkansas’ Justin Smith notched his third double-double of the season with 11 points, 10 of them after intermission, and 12 rebounds.

Alabama guard John Petty did not appreciate a no-call on his missed dunk attempt with 6:37 remaining in the game.

After Petty stepped back in bounds after his drive and dish to the wing, Jordan Bruner drove the paint and gave it back to Petty, who went up in traffic and missed the point-blank shot, which was rebounded by Jaylin Williams. As soon as the Razorbacks started heading up the floor, referee Steven Anderson assessed a technical on Petty, who clearly thought he was fouled by Justin Smith on the play.

The Crimson Tide were not happy with the large disparity in free throws attempted, which wound up 43-8 in Arkansas’ favor.

Even before Arkansas took eight free throws in the final 1:01, they had a big-time edge in free throws attempted. Alabama was whistled for 32 fouls compared to 18 for Arkansas.

Alabama opened by missing its first nine three-point shots. Jahvon Quinerly ended the 0-for streak with a three-pointer at the 9:54 mark to pull the Tide within 21-14.

The Crimson Tide closed the half by making 7 of 8 three-pointers, four of them by 6-10 Jordan Bruner, who just returned Saturday from knee surgery.

Alabama forward Jordan Bruner single-handedly kept the Tide close down the stretch in the first half. He scored all 12 of the Crimson Tide’s points in the final 3:34 of the half by going 4 for 4 on three-point tries.

His final three-pointer came with four seconds remaining before intermission and drew Alabama within 39-38 after the Razorbacks led by 10 points on three occasions.

The officiating crew of Doug Shows, Steven Anderson and Lee Cassell got after it with the whistles in the early going, to the point ESPN’s Jimmy Dykes and Karl Ravech remarked more than once about the frequent foul calls.

Each team had committed seven fouls before seven minutes had elapsed, with the Crimson Tide’s seventh foul at the 13:19 mark, and Arkansas following right behind with its seventh foul at 13:06.

Arkansas’ Davonte Davis went to the bench after back-to-back fouls at the 14:02 mark.

Alabama guard Jaden Shackelford picked up three first-half fouls and did not score on 0-of-2 shooting in the half.

In the first half, Henderson notched two blocked shots, two rebounds, a layup and an assist. Henderson grabbed a missed three-point shot by JD Notae and fired back on the perimeter to Notae, who drilled a three-point shot with 26 seconds left in the half.

Henderson had not scored since the Hogs’ first game at Alabama on Jan. 16. He had logged only two minutes of playing time in two games since then.