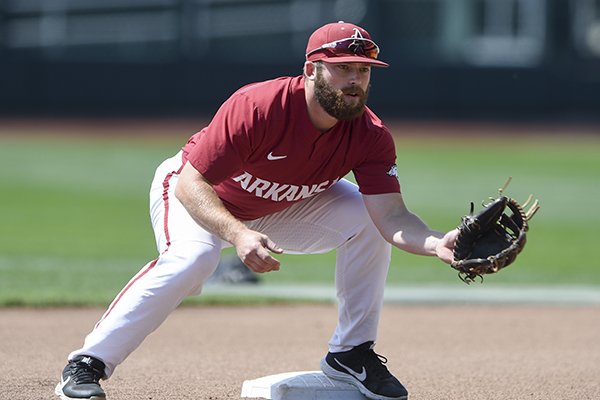 FAYETTEVILLE — The family ties will be thick when the No. 8 University of Arkansas baseball team hosts Southeast Missouri State for a four-game series starting today at 3 p.m. at Baum-Walker Stadium.

SEMO fifth-year Coach Andy Sawyers played catcher for Arkansas Coach Dave Van Horn at Nebraska in 1998, then joined the Cornhuskers' staff as a volunteer assistant in 2000. His coaching path has also included a stint as associate head coach at Texas A&M from 2011-15 for another Van Horn protege, Rob Childress.

Additionally, the Redhawks this season brought aboard SEMO graduate Trevor Ezell, who excelled as a graduate transfer for the Razorbacks in 2019. Ezell is the team's director of offensive player development.

Arkansas vs. SEMO: How to watch and listen, pitching matchup, team comparisons

"Trevor Ezell was one of our starters, kind of our glue on that 2019 team," Van Horn said. "Trevor will be a great coach. He knows a little bit how we run things and some of our secrets, so we'll probably have to change a few things up to get through this series without them figuring some things out."

The Razorbacks (3-0) are coming off a sweep of three Texas-based teams at the College Baseball Showdown, capped by two-hitters against Texas (4-0) and TCU (4-1). Arkansas hit .237 against a series of strong pitchers and struggled to score in the early innings, but the Hogs made up for it with late thunder in all three games.

SEMO (2-1) had to scramble to find a season-opening opponent after its home series with Wisconsin-Milwaukee was scuttled by the snowstorm last week. The Redhawks landed a matchup with South Alabama and beat the Jaguars in two of three games in Mobile, Ala.

"I thought we competed really good," Sawyers said. "We had a chance to sweep. Had a lead on Saturday and couldn't finish that off."

The series will feature big-time arms in both dugouts, starting with today's matchup between Arkansas right-hander Caleb Bolden (0.00 ERA, 1 save) and SEMO left-hander Dylan Dodd (1-0, 1.50 ERA).

Dodd was named the Ohio Valley Conference pitcher of the week after striking out 8 and allowing 1 run on 3 hits and 1 walk in 6 innings at South Alabama, while Redhawks first baseman Austin Blazevic was OVC player of the week after hitting .455 with 5 runs, a double and an RBI against the Jaguars.

"The lefty we're going to see [today] has got good stuff, 90-94 [mph], older kid," Van Horn said. "He held South Alabama down, and they're one of the projected teams to win their division and league. So I know we're going to have our hands full."

Dodd and Niznik both threw 93 pitches last weekend and both finished strong.

Van Horn said designated hitter/first baseman Matt Goodheart, who was suffering from a stomach issue last week, has been cleared to play and will probably be in the lineup at least a couple of times this weekend. However, designated hitter Brady Slavens led the team with a .417 average last week and hit the Razorbacks' only home run, while first baseman Cullen Smith hit .300 and drove in the go-ahead run against TCU in the eighth inning.

"Coach Van Horn is respected obviously with the amount of success he's had, not just from a baseball coaching standpoint, and a lot of his former players are now head coaches," Sawyers said.

Sawyers rattled off the names of Childress, Louisiana-Lafayette's Matt Beggs, Nebraska's Will Bolt and Sam Houston State's Jay Sirianni in addition to himself.

"These are all guys I played with or coached with. We all know who the godfather is, and it's No. 2," Sawyers said, referencing Van Horn's uniform number.

The relationship between Van Horn and Sawyers played a big role in the four-game set taking place. Arkansas had originally scheduled Cal State Northridge for the weekend, but its administration shied away from traveling to Arkansas as the coronavirus pandemic set in. The Redhawks had scheduled a series with Bowling Green, but the Falcons originally announced plans to drop their baseball program in May, though it was reinstated.

"Andy lost a series to somebody, so it worked out for us," Van Horn said. "We both had the same weekend looking for a team. Then we added a fourth game a month ago or so."

The fourth game will test both team's pitching staffs.

"We were a little bit healthier when I agreed to the four games," Sawyers said. "We're actually down a couple of guys. So if Dave called me today and asked if I wanted to play four games, I might not say yes."

The Razorbacks have struggled some with the Redhawks, holding a 6-5 advantage in the series, which has been played exclusively in Fayetteville.

SEMO won on its last trip to Baum-Walker Stadium by a 12-11 count on March 18, 2015, a year the Razorbacks advanced to the College World Series.

"I just think they do a good job recruiting," Van Horn said. "They play in a good league and they play a good nonconference schedule, so I don't feel like they're intimidated.

"Some schools might come in that are mid-majors that are a little nervous. I don't sense this when they're on the field with us."