Slocum finding her fit with Razorbacks 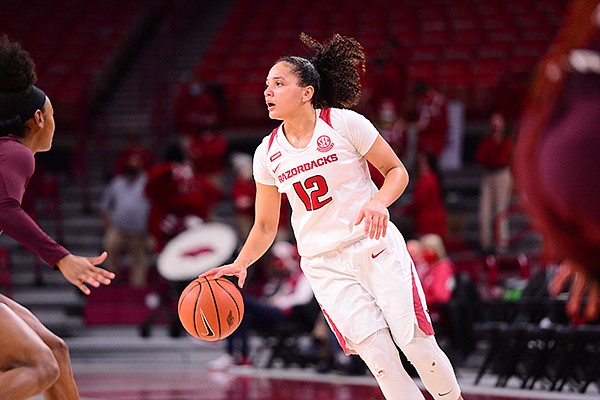 Arkansas guard Destiny Slocum (12) is shown during a game against Mississippi State on Thursday, Feb. 11, 2021, in Fayetteville.

Razorback fans finally are starting to see it.

The 5-7 graduate transfer pumped in a season-high 29 points at LSU on Sunday and has scored 20 or more in three of the last four game she's played for the No. 16 Razorbacks.

Arkansas vs. Auburn: How to watch and listen, team comparisons, notables

A simple act of having Slocum bring the ball up the floor more kicked her play into high gear.

"Sometimes I feel like I have to be in my natural habitat of point guard," Slocum said. "That's what I grew up doing. That's what I studied the game as, and naturally that's just what I am.

"Not that I can't be effective or score off the wing ... I just told him honestly I feel more comfortable bringing the ball up and letting the flow of the game happen."

She missed Friday's game against Ole Miss because of an illness but bounced back with 29 points, one off her career-high, two days later.

Arkansas (17-7, 7-6 SEC) and Slocum have found their rhythm lately. The Razorbacks have won six of seven games and travel to Auburn tonight. The Tigers (5-16, 0-13) have lost 14 in a row but gave Arkansas some trouble before the Razorbacks pulled away for a 77-67 victory in Fayetteville on Jan. 31.

Neighbors and Slocum had a talk after that game, and they understand each other better now.

Neighbors likened it to when he moved from shortstop to second base in high school baseball. The change in perspective was difficult. It was similar for Slocum, he said.

"It made complete, total sense to me," Neighbors said. "... it was like looking at the game through a completely different lens, and I'd been moved 25 feet across the diamond. But it changed how I saw everything.

"We were getting it to her in the half court the same ways, but it just wasn't getting it out of the net and bringing it across half court. Something that simple."

Neighbors has watched Slocum since she played in high school, but this is their first year together.

"It was a good conversation," Slocum said. "It was a good bonding thing for us. He understands me more as a player. He's watched me my entire life, but this is his first year coaching me and this is my first year playing for him and there's still some gaps to fill in.

"One thing I learned in four years of college, when you feel a certain way might as well just say it. Nothing's gonna get solved and nothing's gonna become different if you don't say anything."

Slocum's season stats are almost identical from a year ago at Oregon State, averaging more than 15 points, 4 assists and 3 rebounds per game.

But being a grad transfer, the process of fitting in has been accelerated, which is not easy, Neighbors said.

"It's exhausting because you have to do it fast," Neighbors said. "You don't have a two- or three-year period to do it. But I think she's done great."

Slocum, a two-time All-Pac-12 honoree and national freshman of the year, had to adapt to a different style at Oregon State. It was more of a defense-first mentality, she said, which affected her game, too.

"I felt like, in general, I'd lost that get-up-the-floor, push-it type of player that I was," Slocum said.

It's why she chose to come to Arkansas to play in Neighbors' uptempo game.

Slocum's relationship with Neighbors has endured over the years even though she chose to go to other schools on two other occasions. That's something that makes him special, Slocum said.

"Coach Neighbors has always been there for me, and his relationship with me has never changed," she said. "There's a rare amount of college coaches that will never change even if a player doesn't choose them twice."

She admitted to being a little fearful about contacting him about coming to Fayetteville this year.

"I was so scared to call him," Slocum said. "But he's such a good person. The first thing he said was, 'Things work out the way they work out, but I'll always want to coach you.' And that's how I think about him. At that moment, I promise I was sold.

"My journey with him, obviously I want more. Like I wished I coulda played for him for four years. But all my journeys led to this place where I could end with a coach that has never changed and will love me unconditionally no matter how I play."