State of the Hogs: Settling in for a baseball marathon 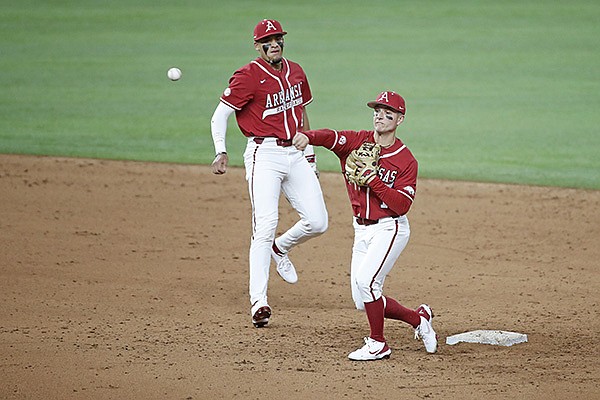 Arkansas second baseman Robert Moore throws during warmups as shortstop Jalen Battles looks on prior to a game against Texas Tech on Saturday, Feb. 20, 2021, in Arlington, Texas.

My old friend Chuck Barrett taught me the right way to think about a baseball season: it’s a marathon, not a sprint.

So a 3-0 start is only one small step in the marathon that is college baseball.

Fans have a perfect right to do backflips over such a start, but players must stay grounded. They need to play the game one pitch at a time, one play at a time.

Arkansas coach Dave Van Horn is the perfect coach to ask about just such a topic. He is solid as a rock. His coaching style builds a foundation that produces the right mindset to play the game.

The question Wednesday for Van Horn concerned the quick ascent to near the top of at least one national poll. Would he address that with his team?

“I saw late yesterday one of the polls had us high,” he said of the D1Baseball poll that has Arkansas ranked No. 2. “I won’t talk about that with the team. It’s too early.”

That’s kind of the point. I guess you don’t have to tell college players wrapping themselves in layers to play in cool temperatures that it’s early. The weather confirms it for about another six weeks.

Van Horn didn’t mind the conversation and delivered a good answer. He pointed to Texas Tech’s 0-3 record in the College Baseball Showdown at Globe Life Field in Arlington, Texas.

In other words, it doesn’t take much to have a slip, and wins turn to losses. A laser-like focus is required to continue to play the game one pitch at a time.

“Tech is good,” Van Horn said. “I will probably mention to the team that we need to stay grounded.

“But I’ll do it kind of in passing. I can tell them that the teams we are going to play will have some extra fight (because of high rankings). We need to stay grounded."

"I like the way they battled back in that first game (against Texas Tech)," he said. "And then on Monday night (against TCU), we were down late in the game and our guys were getting after each other in the dugout.

The Van Horn plan has always focused on daily improvement. You see a leak, get it fixed. You can always find a way to improve. Little things matter in baseball. It’s what Van Horn does best.

There will be some tinkering in the lineup this week against Southeast Missouri State in a four-game series set to begin Thursday at 3 p.m. Matt Goodheart may return to the lineup after staying home because of illness on the opening weekend.

Goodheart is cleared to play and likely will get in a couple of games as Van Horn tries not to push the comeback too hard.

If Goodheart is at designated hitter, that means Brady Slavens would have to move to a position in the field. Slavens led the Hogs with a .417 average in Arlington. He hit a three-run homer in the 4-0 victory over Texas and drove in all four runs against the Longhorns.

Slavens is not a surprise. He was the national junior college player of the year at Johnson County (Kan.) Community College. The Olathe, Kan., product was a recruiting prize for Todd Butler at Wichita State two years ago.

“He was like Robert Moore,” Van Horn said. “He came in early and played the spring at Wichita instead of going to his last year of high school. Then, he came back in the fall under new coaches.”

The story was that the new coaches didn’t think Slavens could play. Boy, were they wrong.

He exploded last spring at Johnson County and the Hogs won a recruiting battle with Missouri and others.

Slavens has a big swing from the left side. He does not hold back.

“He will take his walks, but he attacks the baseball,” Van Horn said. “If it’s near the zone, he’s going to take a hack. We like his approach.”

Slavens didn’t appear to be bothered by the big stage of Globe Life Field. It’s a fabulous new facility that played host to the World Series last fall.

“He’s had some experience,” Van Horn said. “He played at Wichita State and was in some good environments. But last weekend was different.”

Shortstop Jalen Battles, the other former junior college star in the lineup, flourished at Globe Life, too. He hit .385 with solid play in the field. He only had 11 fielding chances, but had just one error.

There was one sparkling play early in the TCU victory that provided a glimpse of the Battles gun. He went in the hole to his right, then fired a laser for the out.

“It was three or four steps,” Van Horn said. “He didn’t rush it. We went wow in the dugout.

“He doesn’t show that (arm) off every day in practice. You only have so many of those in that arm. I have definitely talked to him about that.

“But he showed out, and I’ll remember that play for a long time.”

A lot of the Razorbacks showed out in Arlington. They made only two errors in three games, but it’s still early.

The marathon is just beginning.