Up and at 'em: Hogs deliver early blow to SEMO 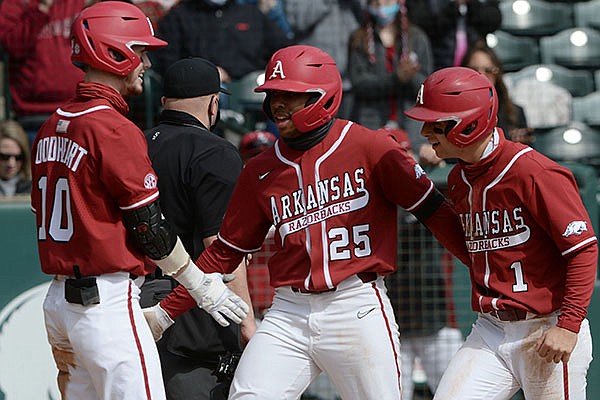 Arkansas center fielder Christian Franklin (25) is congratulated at the plate Saturday, Feb. 27, 2021, by second baseman Robert Moore (1) and designated hitter Matt Goodheart after Franklin hit a two-run home run to score Moore during the second inning of the Razorbacks' 9-3 win over Southeastern Missouri State at Baum-Walker Stadium in Fayetteville.

On Saturday morning, Arkansas faced a younger pitcher on the mound and took control early.

The No. 8 Razorbacks scored all nine of their runs over the first four innings and cruised to a 9-3 victory over SEMO at Baum-Walker Stadium.

All nine Arkansas batters came to the plate during a four-run first inning. The Razorbacks chased SEMO sophomore right hander Ryan Vogt one out into the inning after Vogt allowed 2 hits, 1 walk and 3 stolen bases.

“I feel like we got off to a great start,” Van Horn said. “We scored four runs and stole three bases in one inning. That’s probably what got their pitcher out of the game. They felt like he wasn’t quick enough to the plate and we were just going to keep running on him.”

Vogt walked Robert Moore in four pitches to lead off the bottom of the first, and Christian Franklin and Matt Goodheart followed with RBI singles to put the Razorbacks ahead 2-0.

Moore, Franklin and Goodheart all stole second base in the inning. Goodheart scored on an RBI groundout by Brady Slavens, and Cullen Smith gave Arkansas a 4-0 lead when SEMO reliever Bryce Grossius threw one of the Redhawks’ six wild pitches.

“Coming out of the gate this morning, I thought we did pretty well getting the starter out of the game,” said Goodheart, who made his season debut after missing five games due to health issues. “We were pretty aggressive, pretty hot. I think it just shows how capable this team is of being dangerous at any time in the game, whether it’s the early part of the game or the last inning of the game.”

The top of the order was great for the Razorbacks. Moore and Franklin combined for six hits and a walk, and Goodheart reached base three times batting third.

“I thought his pitch recognition was pretty good,” Van Horn said of Goodheart. “Obviously he’s one of the best hitters in our league. He makes us better.”

The Razorbacks took a 6-0 lead in the second inning on a two-run home run by Franklin to center field. It was Franklin’s third home run in three games against the Redhawks.

Franklin went 4-for-5 with 3 RBI and 2 runs scored Saturday. He also had two stolen bases.

“He’s extremely strong and his swing is outstanding right now,” Van Horn said. “That ball he hit today was into a pretty good breeze and it just rode out of here. He drove that ball.”

Jalen Battles led off the third inning with a double and scored on an RBI single by Moore, and Moore scored on a wild pitch to put the Razorbacks ahead 8-0.

Arkansas took a 9-0 lead in the fourth inning when Smith and Battles each doubled over the span of three at-bats. Battles’ RBI hit was initially ruled an error, but changed.

Arkansas starting pitcher Peyton Pallette cruised with the big lead. The second-year right hander didn’t allow a run in five innings. Pallette gave up three hits and a walk, and struck out eight for his second consecutive start.

On Saturday, Pallette threw 65 pitches, 48 of which were for strikes.

“It kind of gets me going a little more whenever the hitters have a big inning,” Pallette said. “Whenever they get that big inning and score some runs, I’m more fired up than when I start the game.”

SEMO got on the board in the sixth inning when Arkansas freshman reliever Nate Wohlgemuth allowed a hit and two walks in 1/3 inning. SEMO also put a runner on with an error by Moore at second base.

Zack Morris, a second-year left hander, inherited the bases loaded with one out, but struck out Jevon Mason and pinch hitter Braxton Zivich to get out of the jam and preserve a 9-1 Arkansas lead.

“He got a strikeout with a really good breaking ball to end the inning,” Van Horn said.

“He did a tremendous job.”