Hogs exact revenge on LSU with big 2nd half 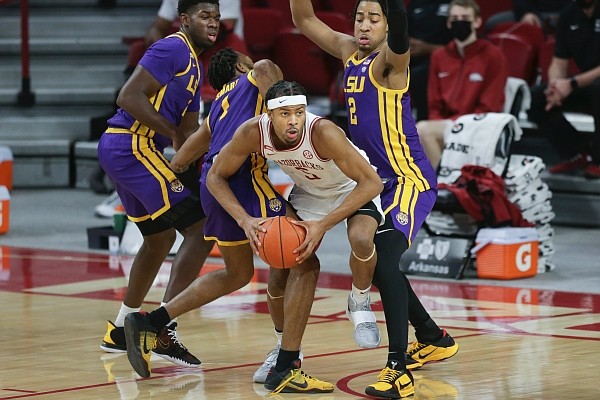 Arkansas guard Moses Moody (5) looks to pass, Saturday, February 27, 2021 during the second half of a basketball game at Bud Walton Arena in Fayetteville. Check out nwaonline.com/210228Daily/ for the photo gallery.

FAYETTEVILLE —  With apologies to Charles Dickens, LSU coach Will Wade found his team’s game at Arkansas on Saturday to be a case of the best of times and the worst of times.

Or in basketball parlance, the best of halves and the worst of halves.

“The second half we got off to a great start and it got away from us. Our rebounding let us down, our defense let us down, our offense bogged down, and Arkansas is a great team that took advantage of us.”

Arkansas’ big push occurred after Trendon Watford hit a 3-pointer to draw LSU within 53-51 with 13:51 left and had something to say to a few Razorbacks players, who in turn responded verbally.

They also responded physically with the scoring spree inside a bigger 25-6 run, making the final score a bit misleading as the Razorbacks took their biggest lead at 78-57 on JD Notae’s old fashioned three-point play with exactly six minutes left.

“I think we played pretty well today now,” Wade said. “Today was not an issue where we weren’t prepared or we didn’t play well. We just didn’t make some shots that were there. We just had a couple of things happen.

“We were pretty solid today for being on the road. We came in and didn’t have some things go our way. Now Tuesday was a different story. Tuesday was effort. Today we were locked in and ready to go in a hostile environment.”

Wade, whose team jumped to a 30-9 lead over the Razorbacks and won 92-76 in Baton Rouge, La., on Jan. 13, was complimentary of Arkansas’ student-led crowd and basketball tradition.

“There were a bunch of people here and it was rocking,” Wade said. “It wasn’t a real SEC atmosphere, but it was a lot closer … They had a lot of students here. I think their governor last night increased their capacity and they had a great crowd. They have great fans and a great basketball tradition and they are winning. Everybody loves a winner.”

He did not believe Arkansas did anything different defensively in the second.

Thomas did feel like his team did things differently.

“Rebounding and us turning over the ball,” Thomas said. “(The Razorbacks) started the half 6 for 6 and they started to rebound, defensive rebounding, and we got a lot of fouls.”

“I don’t know,” Thomas said. “Maybe they wanted the ball more, I guess.”

LSU’s Darius Days was 0 of 8 from the field with all of those shots being three-pointers. He had 18 points and 13 rebounds in the first game between the teams this season.

“Days got great looks and he is going to make those most of the time,” Wade said. “For whatever reason, he struggled today. Off hand, I think he had about eight looks and I would want him to probably take seven or eight of those looks.

“Days has been a great shooter. He’s been great for us for us all season. We are a lot better team when he is making shots. When he doesn’t make shots, teams can congest the lane a little bit and they are able to block a bunch of shots. I think that is what happened in the second half.”

Wade’s message to his team was basically it has to turn things around quickly.

“You saw us at a our best and you saw us at our worst in the first and the second halves,” Wade said. “We have just got to go back to work and it’s a quick turnaround on Tuesday against Vanderbilt, who has been playing really, really well.

"We have a lot of things we have got to get going between now and Tuesday and put all of our effort into that.”

Arkansas, second in the league and a pair of games behind SEC-leading Alabama (18-6, 13-2 SEC), was without injured Justin Smith in the first matchup, and freshman forward Jaylin Williams has improved since that loss.

Smith had 19 points and 10 rebounds while Williams added 8 points, 6 rebounds and 4 blocks in 30 minutes of action.

Those two were a different challenge than 7-3 forward Connor Vanover, who Wade admitted his team was able to take advantage of with its big guys in the first game.

“Obviously having Justin Smith back makes a big difference to be able to guard some of our actions. I think (Davonte) Davis is playing at an extremely, extremely high level.”

Thomas believes Arkansas is better with Smith and a better team overall from the first meeting.

“It’s a little bit of both,” Thomas said. “In the first game, we came out and jumped on them and that is how we won. In this game, we kind of jumped out on them again, but they played better in the second half.”

Wade offered up that his team’s defense is usually better before halftime.

“When the defense is in front of our bench in the first half, it’s pretty good because we can do all the communicating,” Wade said. “When it gets to the other end, sometimes it gets away from us with communication.

“We went back to playing a lot more man, and when you have to play man, Arkansas gets in rhythm calling all the plays. They get their guys going and driving downhill and get to the free throw line like they did. It makes it a lot more challenging for us, but we have got to do better.”