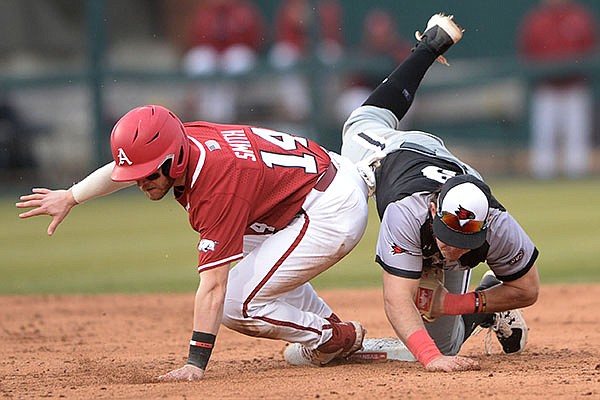 FORECAST According to the National Weather Service, showers are likely before noon Sunday, then less likely in the afternoon. The daytime high temperature is forecast for 59 degrees, but is expected to fall throughout the afternoon.

NOTABLE SEMO coach Andy Sawyers played and coached under Arkansas coach Dave Van Horn. Saywers played for Van Horn for one season in 1998, and was the Cornhuskers’ volunteer assistant coach in 2000. Sawyers is one of six Division I head coaches who are former Van Horn assistants. The Razorbacks will fave five teams coached by former Van Horn assistants this season (SEMO, Louisiana Tech, UALR, Texas A&M and Tennessee)….The four-game SEMO series is the season-opening series for the Razorbacks at Baum-Walker Stadium. Attendance will be limited to around 4,200 for Arkansas’ home games this season due to covid-19 protocols….Arkansas’ Lael Lockhart struck out eight batters in 4 1/3 innings during his first start for the Razorbacks against TCU. Lockhart is a former No. 1 starter at Houston and transferred to Arkansas last summer.…SEMO plans to start junior right hander Austin Williams on the mound Sunday. Williams is a native Arkansan who went to White County Central High School in Judsonia. Williams allowed 3 runs on 3 hits in 2 1/3 innings of relief against the Razorbacks on Thursday....SEMO won two of three games at South Alabama on its first weekend of play….The Redhawks’ director of offensive player development is Trevor Ezell, who was an All-SEC first baseman at Arkansas in 2019. Ezell transferred to the Razorbacks from SEMO….Arkansas designated hitter Matt Goodheart returned to the lineup Saturday after missing the first five games of the season due to health issues. Goodheart went 1-for-3 Saturday and drew two walks….Arkansas’ home record is 111-21 since the start of the 2017 season....The Razorbacks remain ranked eighth in the USA Today Baseball Coaches Poll, which was their preseason ranking. The coaches poll will not begin weekly rankings until after the third weekend of the season.