'It's been beautiful': Davis' growth on display as Hogs keep rolling 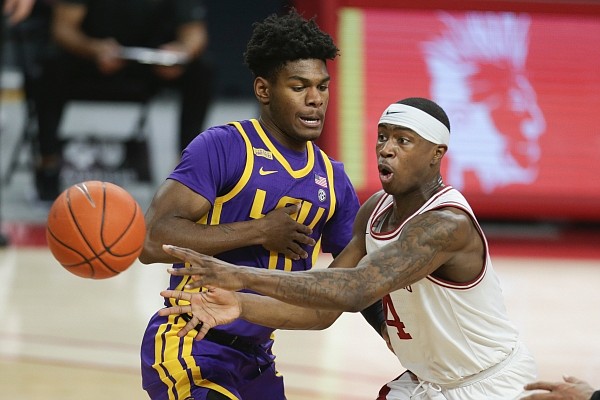 Arkansas guard Davonte Davis (4) passes, Saturday, February 27, 2021 during the first half of a basketball game at Bud Walton Arena in Fayetteville. Check out nwaonline.com/210228Daily/ for the photo gallery.

FAYETTEVILLE — The intensity with which Davonte Davis played Saturday against LSU was written all over his face.

Typically calm and collected when on the floor, Davis figured it was as good of a time as any to show some emotion in the second half of No. 20 Arkansas’ 83-75 win over LSU.

After collecting a loose ball, the freshman initiated a one-man fast break, split three Tigers defenders and finished at the rim despite a contest from Eric Gaines.

Davis yelled in the direction of the Arkansas bench and gave LSU’s guards his best game face. His bucket put the Razorbacks ahead 16 points with eight minutes remaining, and put their foot on the Tigers’ throat.

Davis finished the Razorbacks’ ninth consecutive win in conference play with 15 points, 6 assists and 5 rebounds. He made 7 of 12 shots.

He was one of four Arkansas players in double figures alongside Justin Smith (19 points), Moses Moody (18) and JD Notae (18).

Two of the freshman’s misses came from three-point range, where he is just 2 of 9 for the season. But Davis was lights out inside the arc.

For the second time in three games he converted seven two-point looks. Arkansas is 5-0 in SEC games when he makes five-plus interior shots.

“He did that in the second half when LSU was about to go on a run and we were struggling to score. He just makes those plays that are just like, ‘Thank God he is on our team.’”

Davis was a consistent scorer for the Razorbacks on Saturday. He scored seven points in the first half when he made 3 of 7 shots, but he was even better after halftime. He scored eight points on 4 of 5 from the floor in the second half. Arkansas outscored the Tigers by eight with him on the floor.

For the second consecutive game, Davis opened the game by knocking down a midrange jumper. He made four in the win, including three in the first half.

Musselman was proud of the way Davis shared the ball in his time at point guard, matching a career-high six assists against no turnovers. He also finished with six assists on Jan. 9 against Georgia.

For the third time in five games, Davis did not commit a turnover. He has 18 assists and six turnovers over the last six games. Musselman said the freshman’s play was pivotal as Jalen Tate sat with foul trouble.

“Devo made some really great, great passes for us,” Musselman said. “That was really important for us. He’s now starting to play a little bit of 1 and when JD and Devo are out there together, they can kind of share the point guard duties and the other one can slide to the 2 based on who’s defending them.”

Davis’ six assists generated 14 points and were spread among four players — Smith, Notae, Jaylin Williams and Desi Sills. He found Smith three times and Sills on the right wing in the first half for Sills' first three-pointer in SEC play since Jan. 27.

Offensively, Davis has played some of his most efficient basketball of late. Since a 3 of 10 performance at Missouri, he has made 16 of his last 25 shots (64%) inside the arc.

“He’s got great confidence. He doesn’t take shots that are ill-advised,” Musselman said. “He kind of gets to an open area. I thought in the first half he really helped us, too.

“I thought there were some possessions we were not being aggressive enough, and Devo made some big shots. We need that out of our guards.”

Notae, who scored in double figures in back-to-back games for the first time in February, has marveled at Davis’ development and impact in the last two months.

"Devo, he's special, for sure,” Notae said. “He just does things that Devo does. Ain't really nothing you can say.”