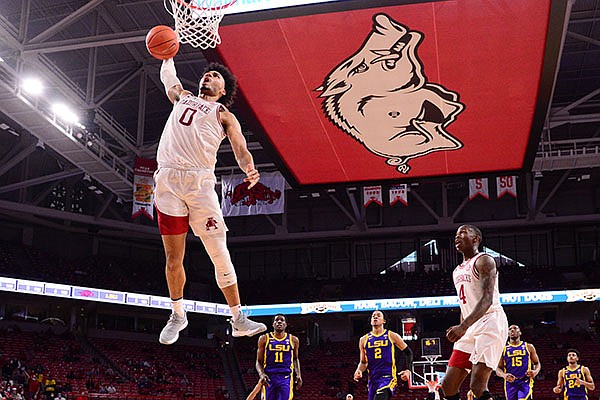 Arkansas' Justin Smith (0) dunks the ball during a game against LSU on Saturday, Feb. 27, 2021, in Fayetteville.

FAYETTEVILLE — For the University of Arkansas basketball team, February couldn't have gone any better.

The No. 20 Razorbacks beat LSU 83-75 on Saturday in Walton Arena with a dominating second half to close February with a 6-0 record.

"Going an entire month without losing is a big-time accomplishment, and a lot of teams don't get a chance to do that," said senior forward Justin Smith, who led Arkansas with 19 points and 10 rebounds. "I'm really proud of the way we came together after the Oklahoma State game.

"I think we really kind of figured it out in a way. We're playing our best basketball right now, and we're going to keep it going, keep pushing."

The Razorbacks played a better first half on Saturday, but they were behind by as many as nine points and trailed at halftime 37-32.

"We played a bad first half and LSU played great," Musselman said. "We were kind of stuck in mud."

Musselman said the Razorbacks had 120 passes in the first half -- their most this season -- but weren't aggressive.

"We weren't ready to lock and load and let that thing fly. And you can't be High School Harry and just pass the ball above your head."

The Razorbacks ran more plays against LSU's zone defense in the second half -- what Musselman called their hybrid zone and man-to-man sets -- and got going offensively.

"When the defense is in front of our bench in the first half, it's pretty good because we can do all the communicating," Tigers Coach Will Wade said. "When it gets to the other end, sometimes it gets away from us with communication.

[Video not showing up above? Click here to watch » https://www.youtube.com/watch?v=XGB43L9xcj8]

"We went back to playing a lot more man and when you have to play man, Arkansas gets in rhythm calling all the plays. They get their guys going and driving downhill and get to the free-throw line like they did."

After the Tigers pulled within 56-53, the Razorbacks used a 22-4 run -- with junior guard JD Notae scoring the last six points -- to push their lead to 78-57 with six minutes left.

"Just knowing that [the Tigers] don't really want to guard," Notae said of the Razorbacks' success on offense in the second half. "They just want to make us settle. So we just attacked and got what we wanted."

"I think in the first half we were surprised by the zone, so we were tentative in attacking it," Smith said. "But in the second half, we really attacked it and really got the ball moving.

"I think we played more together in the second half, just moving the ball, getting each other open and getting good shots. Then we really got a lot of stops on the defensive end. We really clamped down on that side of the ball."

"I thought in the second half defensively, we were really, really good," Musselman said. "This is a high-scoring team, LSU is.

"They've got great transition offense. They've got a lot of really, really good one-on-one players. And to think we held them below 40% from the field, really impressive."

LSU freshman guard Cameron Thomas, averaging an SEC-leading 22.5 points coming into the game, had 25 on Saturday with 13 in the first half. Sophomore forward Trendon Watford had 16 points for the Tigers (14-8, 9-6), and junior guard Javonte Smart added 15.

LSU junior forward Darius Days, who had 18 points and 13 rebounds against Arkansas earlier this season, shot 0 of 8, didn't score and had 2 rebounds in 18 minutes.

"Days got great looks, and he is going to make those most of the time," Wade said. "For whatever reason, he struggled today."

"He's got great confidence. He doesn't take shots that are ill-advised."

Arkansas also got a big game from freshman forward Jaylin Williams with 8 points, 6 rebounds and 4 blocked shots off the bench.

"We're relying on a lot of different guys," Smith said. "It was a win-by-committee for sure today."

"It's something that you've just got to sit back and enjoy because, I mean, it doesn't happen," Notae said of going a month without an SEC loss. "And for us to do it feels special."