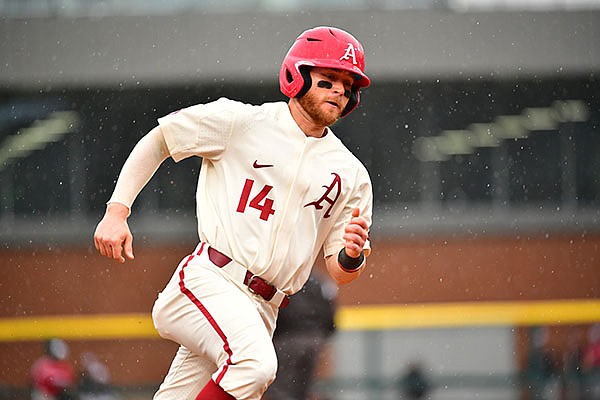 Arkansas' Cullen Smith runs toward home plate during a game against Southeast Missouri State on Sunday, Feb. 28, 2021, in Fayetteville.

The Razorbacks and Redhawks played through steady rain for much of their contest. Home plate umpire Tim Cordill called for the tarp after SEMO's final out in the top of the fifth inning.

Because the game lasted five innings, it will be ruled an official contest. Arkansas (7-0) swept the four-game series.

Arkansas took control with a three-run second inning to take a 3-0 lead. Cayden Wallace and Brady Slavens both homered to lead off the inning, and Casey Opitz scored on Jalen Battles' RBI double.

After SEMO scored once in the top of the third, Arkansas extended its lead to 5-1 in the bottom of the inning. Cullen Smith's RBI double scored Slavens, who walked, and Smith scored on a throwing error by SEMO pitcher Connery O'Donnell to first base.

O'Donnell's throw went over the head of first baseman Austin Blazevic, who collided with Casey Opitz. Opitz laid on the field for a couple of minutes before walking off on his own power.

A Razorback spokesman said Opitz was "fine" after the collision and was taken out of the game as a precaution.

SEMO scored twice in the top of the fourth on Ty Stauss' two-run single off Arkansas starter Lael Lockhart. Caden Monke replaced Lockhart and walked the only two batters he faced, but Kevin Kopps stranded the bases loaded to preserve a 5-3 Razorbacks lead.

Arkansas scored six before recording its second out in the bottom of the fourth. Robert Moore doubled to lead off the inning and scored on an error, and Matt Goodheart hit a two-run home run to give the Razorbacks an 8-3 lead.

Wallace followed with a double and scored on Slavens' RBI double. Ethan Bates and Battles also had RBI hits in the inning to extend Arkansas' lead to 11-3.

Blazevic hit a leadoff homer against Kopps to start the fifth inning. Kopps earned the win with 1 1/3 innings in relief.

There is a rain delay at Baum-Walker Stadium. Umpires called for the tarp after Kevin Kopps retired three straight following Austin Blazevic's leadoff homer in the top of the fifth inning.

It's worth noting that because SEMO has batted in the fifth, this game could be considered official if they are unable to restart.

Austin Blazevic homered to right field to lead off the fifth for the Redhawks. The home run came against Kevin Kopps.

The Razorbacks stranded two when Robert Moore struck out and Christian Franklin grounded out to shortstop. But Arkansas scored six runs in the bottom of the inning to counter SEMO's three runs in the top.

Ethan Bates' first career hit was an RBI single to score Brady Slavens from third base. Jalen Battles followed with an RBI double to score Dylan Leach, who walked.

The Razorbacks have two in scoring position with just one out. They have already scored six runs in the inning.

Brady Slavens doubled to right field to score Cayden Wallace. The Razorbacks have scored four runs with no outs in the inning.

Matt Goodheart hit a two-run home run to right-center field and the Razorbacks have a five-run lead again. That was Goodheart's first homer of the season.

Cayden Wallace doubled in the following at-bat. This could be a big inning for Arkansas.

Robert Moore doubled to the wall in left field to lead off the fourth and he scored in the next at-bat when shortstop Tyler Wilber let a ground ball from Christian Franklin go under his glove and into left field. Wilber was charged with an error on the play.

SEMO stranded the basses loaded when two-hole hitter Tyler Wilber grounded out to end the inning. Arkansas shortstop Jalen Battles had to cover some ground to get to the slow roller — slowed by the wet grass, no doubt — but he made the play in plenty of time to throw out Wilber.

The Redhawks have stranded five today.

Andrew Keck singled to lead off the inning and Jevon Mason walked with two outs. They executed a double steal — the Redhawks' second double steal of the game — and scored when Ty Stauss plated both with a single.

That ended the day for Lael Lockhart, who will take a no-decision for the second time in two starts. His partial final line: 3 2/3 innings, 3 runs, 3 hits, 3 walks, 5 strikeouts.

Things didn't go well for Caden Monke in relief of Lockhart. Monke walked two batters to load the bases, and the Razorbacks have gone back to the bullpen to see if Kevin Kopps can get them out of the jam.

Arkansas stranded two base runners when Jalen Battles flied out to shallow right field. The Razorbacks have stranded four today.

This is a stereotypical Sunday game, with the innings lasting an average of almost 30 minutes apiece.

The Razorbacks have scored twice in the inning. Brady Slavens walked, stole second and scored on a double by Cullen Smith.

Smith scored on a scary play in the next at-bat. Casey Opitz hit a ground ball to the pitcher, but Connery O'Donnell overthrew first baseman Austin Blazevic, and Blazevic collided hard with Opitz.

Opitz landed on his back and his head whipped back against the ground. He was down for a couple of minutes while he was evaluated, but eventually walked off on his own power.

Dylan Leach is pinch running for Opitz and will replace him behind the plate in the fourth inning.

The Redhawks loaded the bases with no outs on two walks and a fielder's choice, but only got one run to show for it when Jevon Mason scored on Peyton Leeper's RBI groundout.

The big play in the inning came on the second out when third baseman Cullen Smith threw out Ty Stauss at home plate. There were only two runners on base at the time, so Stauss did not have to come home on the play.

Lael Lockhart struck out Austin Blazevic looking at a 3-2 pitch to end the inning and strand two runners.

Robert Moore walked with two outs, but he and Jalen Battles were stranded when Christian Franklin struck out to end the inning.

They are working on the dirt between innings, but they will keep playing through the rain into the third.

Jalen Battles' RBI single to center field scored Casey Opitz, who doubled with one out. That was Battles' seventh RBI this year, which ties Christian Franklin for the team lead.

Cayden Wallace led off the bottom of the second with a home run to left field, and Brady Slavens followed with a powerful shot to the scoreboard in right-center field.

That was the second home run of the series for both hitters. Wallace has shown a lot of improvement over Week 1 during this series.

SEMO put a base runner on with one out in the second, but Danny Wright hit into a 6-4-3 double play to end the inning. Jalen Battles and Robert Moore have shown this already, but they will be one of the best double play duos in the SEC.

Robert Moore and Matt Goodheart flied out, and Christian Franklin grounded out to third against Austin Williams in the first inning.

The rain also picked up some in the last few minutes. They will continue to play through it for now.

Lael Lockhart made quick work of SEMO in the first inning. Peyton Leeper popped up to the first baseman on the first pitch, and Lockhart needed only eight more pitches to get through the inning. He struck out Austin Blazevic to end the inning.

There is a pretty steady rain falling. They will play through it for now, but we might be headed for a delay at some point.

Arkansas and SEMO are set to get underway at 1 p.m. today.

There is rain in the forecast, although it might hold off long enough for the teams to play. It is warm today in Fayetteville, in the upper 60s, but the temperature is expected to drop as the game goes on.

The Razorbacks will start senior left hander Lael Lockhart today. Lockhart pitched 4 1/3 innings in his first start against TCU, and struck out eight batters. Lockhart gave up one run in his first outing.

SEMO will counter today with junior right hander Austin Williams, who grew up in Arkansas in the small town of Judsonia. Williams is pitching against the Razorbacks for the second time this weekend. He allowed 3 runs on 3 hits in 2 1/3 innings Thursday.

Freshman Ethan Bates will make his first start for Arkansas today in left field. Bates, who is from Hot Springs, made his debut yesterday as a defensive replacement at third base.

Otherwise the Arkansas lineup is the same as yesterday.