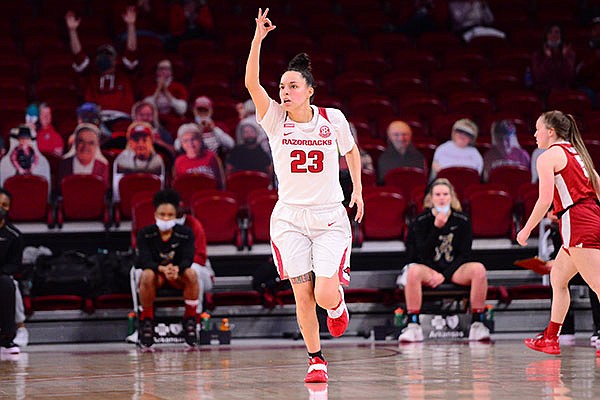 Arkansas guard Amber Ramirez reacts after hitting a three-point shot during a game against Alabama on Sunday, Feb. 28, 2021, in Fayetteville.

With the win, Arkansas enters the Southeastern Conference tournament as the No. 6 seed and will face 11th-seeded Ole Miss on Thursday.

Alabama is the No. 7 seed and will face 10th-seed Missouri on Thursday.

Against the Crimson Tide, Ramirez scored 15 of Arkansas' 26-first quarter points on 5-for-7 shooting from three-point range.

She made pair of threes on consecutive possessions to give the Razorbacks a 12-9 led en route to a nine-point advantage at the end of the first. Arkansas never trailed again. Ramirez knocked down two more threes before halftime and had 23 at the break.

Arkansas held Alabama at bay and then sealed it with a 13-3 run in the fourth quarter.