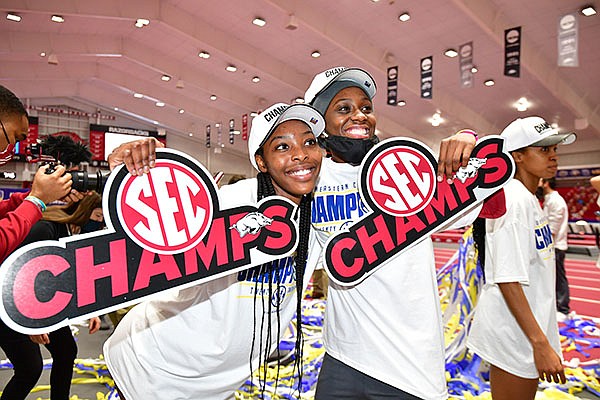 Arkansas runners Rosey Effiong (left) and G’Auna Edwards celebrate after the Razorbacks won the team title at the SEC Indoor Championships on Saturday, Feb. 27, 2021, in Fayetteville.

FAYETTEVILLE — The University of Arkansas women's track and field team already had clinched a landslide victory at the SEC Indoor Championships on Saturday night before the 1,600-meter relay.

But the No. 1-ranked Razorbacks weren't going to let up.

"Our kids have a lot of pride," Arkansas Coach Lance Harter said. "We're going to compete to the very last event no matter the score."

The Razorbacks broke the school record of 3:28.70 set at the 2015 NCAA Indoor Championships by the team of Daina Harper, Sparkle McKnight, Chrishuna Williams and Taylor Ellis-Watson.

Campbell was a substitute anchor for Paris Peoples -- who felt some muscle tightness after finishing seventh in the 400 -- on the Razorbacks' record-setting relay.

"We wanted to make sure Paris is ready for nationals, so we had to do some improvising in our relay lineup, but the kids all did a great job," Harter said. "Kethlin Campbell ran an absolutely fantastic anchor."

It was the second race Saturday for Burks-Magee and Effiong, who took third and fifth in the 400 in 52.10 and 52.30, respectively.

Junior Lauren Gregory took third in both the mile and the 3,000 for the Razorbacks in races an hour apart.

Of the 26 Razorbacks who competed in the meet, 25 scored.

Arkansas had the second-highest team total at an SEC indoor meet since 2013 -- when the conference expanded to 14 teams by adding Missouri and Texas A&M -- to the 151 scored by the the Razorbacks in 2019.

The Razorbaks won an SEC title in cross country, indoor or outdoor track for the 19th time in the last 20 competitions.

"It's quite a streak, and to be able to have the balance to do all three well at this level says a lot about our kids and our coaching staff," Harter said. "Because this conference is tough. Everybody wants to hammer you."

But as usual, Arkansas was the hammer. The other SEC teams were the nails.