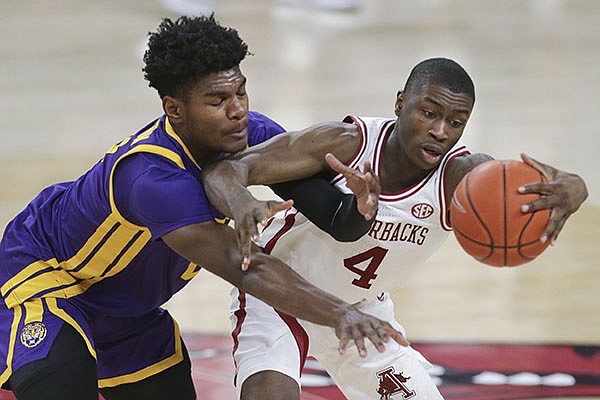 Davonte Davis, a freshman from Jacksonville, has become a difference-maker for the Arkansas Razorbacks.

On Saturday against LSU, Davis stepped up big against the Tigers by scoring 15 points, grabbing 5 rebounds and dishing out 6 assists.

His defense was equally as good.

The win, the Razorbacks’ ninth consecutive SEC victory, should assure the Razorbacks of playing in the NCAA Tournament next month in Indianapolis.

Arkansas entered February with a 13-5 overall record and a pedestrian 5-4 mark in SEC play. They leave 19-5 and 11-4, and ranked No. 23 in the NET rankings before Saturday’s win.

No team in the country has had a better month than the Razorbacks.

Under the guidance of Coach Eric Musselman and his staff, these transfers and freshmen have become a team that some see as a No. 3 seed in March Madness.

The Razorbacks play as a team and win as a team.

At times in January, they looked like they had a chemistry problem.

JD Notae came off the bench to have his best conference game, logging 31 minutes, scoring 18 points and grabbing 6 rebounds. He also tied Jaylin Williams for the team lead with two steals.

But almost everyone stood out.

There wasn’t a hero, and unselfish play is what separates this team. That’s what Musselman stresses.

For example, Moses Moody — the most talked about player on the team — didn’t have a great day shooting, but he made his presence known with eight rebounds and five assists.

With 11:46 to play, the Razorbacks were in the bonus but had only been called for one foul.

The difference in fouls was only 22 for LSU to 15 for Arkansas. That’s because it is harder to get fouled when you are shooting threes or mid-range jumpers.

The Hogs also played defense the way it is supposed to be played, especially in the second half. They were in the Tigers face, denying them passes and open shots.

At one point in the second half, the visitors were 1 of 9 on field-goal attempts. That’s when the Hogs built an insurmountable lead.

This team is better than expected. There was always some obvious talent, but blending the pieces into a single unit with one purpose, one goal took some time.

After a slow start that looked nothing like the team that handled Alabama on Wednesday, the Razorbacks finished the way fans knew they could — strong.

The game was not as close as the score.

It wasn’t the same Razorbacks team.

Devo and Moody were two of the big recruits from Arkansas, and they have proven why they were widely recruited by programs across America.

Devo has worked his way into the starting lineup and earned every minute of his playing time by being a team player.

Those two combined for 11 of Arkansas’ 17 assists.

When the Razorbacks are moving the ball and getting assists, they are hard to beat.

All they have to do now is take their A-game to March.