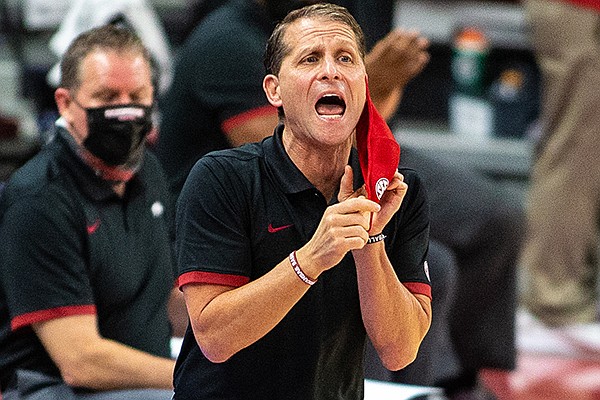 Arkansas coach Eric Musselman yells to his players during a game against Southern on Wednesday, Dec. 9, 2020, in Fayetteville.

FAYETTEVILLE — Arkansas played uncharacteristically in a number of ways Saturday during its 81-68 home loss to No. 12 Missouri.

The Razorbacks missed 20 of 23 layup attempts, according to an updated count on Arkansas’ StatBroadcast system, shot 26.8%, and two starters combined for 10 points on 1 of 21 from the floor.

Selfishness also crept in at times in the game.

Those weren’t the words of Arkansas coach Eric Musselman. They've come from his players since the final buzzer sounded.

“It was the first time we didn't share the ball as well as we have been in the past,” Musselman said Monday. “Those were some of the things that our guys have talked about. We've got some areas to clean up, for sure.”

The Razorbacks finished with seven assists in the loss to the Tigers, tied for the second fewest by an Arkansas team in a game over the last five seasons. Desi Sills and Connor Vanover led the way with two apiece.

Through two SEC games, the Razorbacks have assisted on 39.2% of their scores, according to KenPom analytics. That mark is seventh in the league among the nine teams who have played two conference games.

Musselman was not pleased with Arkansas finishing with a season-low seven assists on Saturday. But he also pointed out that a number of the Razorbacks’ field goal attempts were less than ideal.

He said Monday he has sent many text messages and had numerous phone calls and face-to-face meetings with players in an attempt to drive home the importance of getting quality looks and being selfless.

“Our shot selection has got to improve, and us sharing the basketball has got to improve,” Musselman said. “And it’s not one guy. Last year, I thought you could argue we had some questionable shots with Isaiah (Joe) and Mason (Jones), but those guys shot the ball at a really high clip.

“If guys are going to take difficult shots, you have to shoot them at a high percentage. It’s the first time in five years that I’ve really dug deep into shot selection with players. Again, it’s multiple, multiple players. It’s a lot of guys that have to improve shot selection and improve in sharing the basketball.”

Asked what led to a bit of the selfish play against Missouri, Musselman said he prefers the phrase ill-advised shots. Something else he pointed to is the Razorbacks must respect their opponent on a nightly basis.

“I think we have a group of really high-character student-athletes that want to win," he said. "That's why we won our first nine games, and we didn't have any hiccups. There's a lot of teams across the country that play nonconference games and they get hiccups all the time, and they do it year after year. Our guys handled their business, and we played really bad against a really good team.

Arkansas owns the SEC’s third-best offensive efficiency rating (106.2) in conference play, according to KenPom, and that figure could rise by simply being adequate at the rim. The Razorbacks made a combined 6 of 30 layup attempts against Auburn and Missouri.

Musselman would like to see his players take an old-school approach on close looks.

“I have addressed technique, yes. I have addressed knock off the degree-of-difficulty layups,” he said. “It's been a problem with this team all year, our shots around the rim. It's not just one game. It got magnified in one game.

“But when you get an offensive rebound and there's three guys with their arms up, you don't try to shoot through six arms. You pass the ball out and you spray it around for a quick three. Yes, we've got to work on that stuff.”