UK goes on run without Calipari 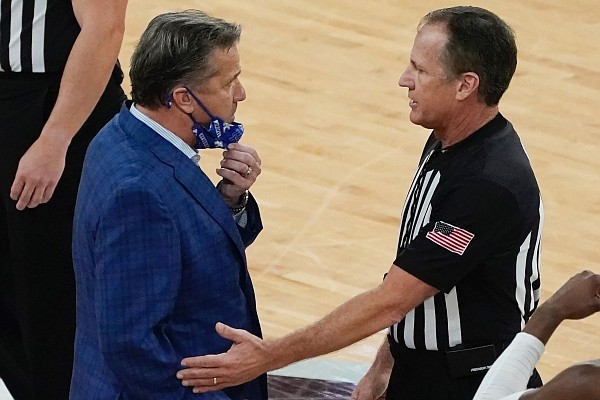 Kentucky head coach John Calipari, left, confers with an official after being tossed out of an NCAA college basketball game against Mississippi State during the second half in Starkville, Miss., Saturday, Jan. 2, 2021. (AP Photo/Rogelio V. Solis)

FAYETTEVILLE — It didn’t take Bruiser Flint long to get his first action as acting head coach for Kentucky.

Flint had to swing into action after Coach John Calipari was ejected at the 9:04 mark of the second half after arguing with officials at Mississippi State’s Humphrey Coliseum on Saturday.

Much like Kentucky’s response after Cal’s ejection at Arkansas last season, the Wildcats rallied to post a 78-73 win in double overtime against the Bulldogs.

The win snapped the Wildcats’ six-game losing streak, their longest in nearly 100 years. It also extended Kentucky’s record to 15-0 over Mississippi State under Calipari.

Calipari was given two technical fouls and booted with Kentucky trailing 52-46 after a made jumper by Mississippi State’s Iverson Molinar. Jalen Johnson made 3 of 4 free throws after the ejection to extend the Bulldogs’ advantage to 55-46.

The Wildcats, as has been their pattern after Calipari ejections, got improved play after his dismissal. Freshman Dontaie Allen hit a three-pointer 18 seconds after the incident to trigger a 10-0 run by the Wildcats.

Asked in the postgame about Kentucky’s pattern of playing better after Calipari ejections, Flint laughed and said, “You want Cal thrown out every game?”

Then he added, “That usually happens in most instances with teams, not just Kentucky. … They regroup. They get themselves together, and they usually go on a run.”

Speaking on his radio show Monday night, Calipari said, “In most cases when I get tossed, it changes the fight in my team. I’m not going to get thrown out a bunch of games. If I see things I think need to be addressed, I’m not afraid [to get tossed].”

Things certainly turned in Kentucky’s direction under similar circumstances last year at Walton Arena, when Calipari was ejected with 8:19 remaining in a 44-44 game against Arkansas.

Guard Mason Jones made 3 of 4 free throws after the double technical to give Arkansas a 47-44 lead, but the Wildcats went on a 17-2 run with assistant Kenny Payne calling the shots to take control at 61-49 with 2:42 left.

Calipari was also ejected during games at South Carolina in 2014 and 2016, with the Wildcats losing in the first instance and winning in the second.

Florida guard Keyontae Johnson, who collapsed face-down on the court on Dec. 12 and spent 10 nights in hospitals, returned to the bench for the first time in Saturday’s 83-79 win over LSU at Exatech Arena.

Johnson, a preseason All-SEC selection and projected first-round NBA Draft pick, fell while walking back to the court after a timeout during the Gators’ 83-71 loss to Florida State in Tallahassee, Fla. He received emergency medical treatment and spent two nights in the hospital in Tallahassee before being airlifted to UF Health in Gainesville, Fla., where he spent the next eight nights.

The Gators postponed their next four games against North Florida, Florida Atlantic, Florida A&M and James Madison, then resumed 18 days after Johnson’s collapse with a 91-72 win at Vanderbilt on Dec. 30.

Johnson suffered a covid-19 infection over the summer, according to media reports, and the Gainesville Sun has reported Johnson had acute myocarditis, an inflammation of the heart that health experts say is a rare side effect of contracting the virus.

Alabama is aiming for sole possession of first place in the SEC in tonight’s home showdown against Florida after taking down league favorite Tennessee 71-63 on the road Saturday.

Alabama guard John Petty Jr., an SEC co-player of the week, needs 10 three-pointers to take the school’s career record over Brian Williams (1996-99), who made 263.

The SEC office announced Monday that Alabama guard John Petty Jr. and Florida forward Colin Castleton were league co-players of the week, and Kentucky’s Dontaie Allen was the SEC freshman of the week.

Allen, a 6-6 guard from Falmouth, Ky., had 23 points and five rebounds in the Wildcats’ win at Mississippi State, including 7-of-11 shooting from three-point range. Allen had played 20 career minutes before logging 32 against the Bulldogs.

Missouri recovered from its 73-53 home loss to No. 7 Tennessee by holding Arkansas to 26.8% shooting in an 81-68 win Saturday at Walton Arena.

That performance gave the Tigers their fourth Quadrant 1 win of the season, tying Gonzaga and Houston for the NCAA lead in that department.

Tennessee is 2-1 vs. Quadrant 1 competition, while Alabama and Florida are 1-1 and Georgia has yet to face a Quadrant 1 opponent.

Arkansas and Georgia are among 10 SEC teams without a Quadrant 1 win. The Razorbacks are 0-1 in those games, as is Ole Miss, Mississippi State, South Carolina, Texas A&M and Vanderbilt. Auburn is an SEC-worst 0-3 in Quadrant 1 games, while Kentucky and LSU are 0-2.

“I’ve coached so many great players, so many great kids,” Howland said after win No. 500. “I told our team after the game the biggest thing that I feel blessed about is that I’ve found something that I love to do. I’ve been doing it my whole life. That’s what you have to find as a person, is whatever it is that you love and that you’re passionate about, to make that your life.”

South Carolina will be the final SEC team to open conference play with its scheduled home date against Texas A&M on Wednesday at 8 p.m. (ESPNU).

The Gamecocks canceled or postponed five consecutive games after getting covid-19 testing results back Dec. 12, including their scheduled SEC opener at Kentucky on Dec. 29. South Carolina (2-2) resumed action with a 78-71 win over Florida A&M on Saturday in its first home game of the season.

The NCAA instituted in 2018-19 a rating system called the NET Rankings, which took the place of the Ratings Percentage Index. An acronym for NCAA Evaluation Tool, the NET rankings take into account game results, strength of schedule, game location, scoring margin, net offensive and defensive efficiency and the quality of wins and losses. This set of rankings is the first of the 2020-21 season.

A well-scheduled battle of the SEC’s only 2-0 teams will go down in Coleman Coliseum. Florida opened 3-0 before losing Keyontae Johnson in an 83-71 loss at Florida State. The Gators paused for 18 days before opening SEC play. Alabama has won three in a row after a loss to Western Kentucky.

8 | Consecutive wins at Alabama by Florida heading into tonight

10 | Nights spent in the hospital by Florida’s Keyontae Johnson after his collapse to the court Dec. 12

15 | Consecutive Florida points by Colin Castleton to open the second half vs. LSU on Saturday