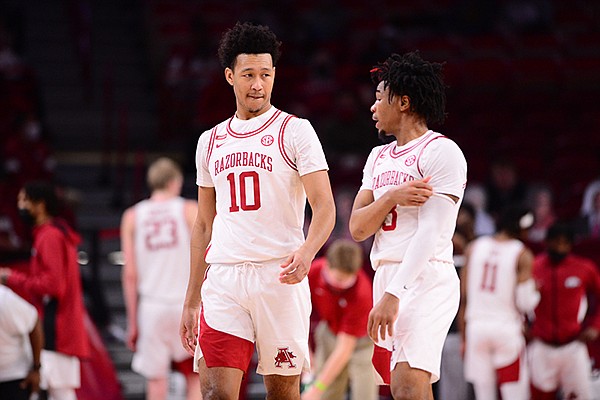 FAYETTEVILLE — University of Arkansas forward Jaylin Williams might have earned more playing time tonight at No. 9 Tennessee with his performance off the bench against Missouri.

Williams, a 6-10 freshman from Fort Smith Northside, had 8 points and 3 rebounds in 17 minutes in the Razorbacks’ 81-68 loss to the Tigers.

“I think Jaylin did a really nice job for us,” Arkansas Coach Eric Musselman said. “He’s done a really good job in practice. I would like to see him get more involved, because he continues to progress and get better.”

Arkansas vs. Tennessee: How to watch and listen, notables, team comparisons

Williams could be an option for Musselman to start tonight with senior forward Justin Smith — expected to miss three to six weeks after undergoing ankle surgery — out for a second consecutive game.

Davonte Davis, a 6-3 freshman guard, started against Missouri in Smith’s place, but if Musselman decides to go bigger he could start Williams, 6-9 senior Vance Jackson or 6-8 junior Ethan Henderson.

“We’re still tinkering with what we’ll do with a starting lineup,” Musselman said before Monday’s practice. “So who starts? I’m not really sure.

“We probably won’t know until right before tip-off who is going to start. We’ll tinker with some different lineups. We just need somebody to step up and fill a void.”

Jackson, a graduate transfer from New Mexico, started the opener and scored 15 points in a 142-62 victory over Mississippi Valley State, but he’s averaged 3.2 points in the nine games since then. He played 12 minutes at Auburn and started in the second half with Smith injured, but Musselman pulled him less than 90 seconds into the half and Jackson didn’t return. He played one minute against Missouri.

Musselman said Jackson continues to have a good attitude and work ethic.

“I came into the office [Sunday] and he was in here shooting,” Musselman said. “He’s the first one in here [Monday] morning shooting. He’s working.”

“His shot hasn’t been falling and a lot of that can be not getting enough reps, meaning in game,” Musselman said. “If a guy gets in and he goes 0 for 1, that’s not a fair way to assess him. We do need Vance to rebound the ball and defend for us. Get loose balls.”

In Jackson’s first three college seasons, he hit 157 of 444 three-pointers.

“Certainly from a three-point shooting standpoint, if he misses one or if he misses eight, I still feel like he’s a great, great shooter,” Musselman said.

“Ethan, I feel like he’s played his minutes any time he’s gotten them,” Musselman said. “There’s only so many minutes that can go around, you know what I mean?”

Tennessee Coach Rick Barnes said 6-4 freshman guard Jaden Springer, who injured his ankle against Alabama on Saturday, practiced Tuesday and will be available to play tonight.

Springer, a five-star recruit from Charlotte, N.C., who played at IMG Academy in Florida last season, is averaging 10.6 points, 3.1 rebounds and 18.6 minutes for the Vols off the bench. He scored 21 points in the season opener against Tennessee Tech.

“Certainly you don’t want to see that happen to anybody, because it’s happened to all of us at some point,” Barnes said of losing a key player like Smith. “But the more over the next couple of weeks that he’s not there, I do think they’ll adjust, and when he does come back they’ll be that much better for it.

“Eric’s been around a long time, and he’s a terrific coach. He’ll make the adjustments that he needs to make with what he’s got. And whatever he’s got, I promise you he’ll put them in the best position possible that he thinks they need to be in to win basketball games.”