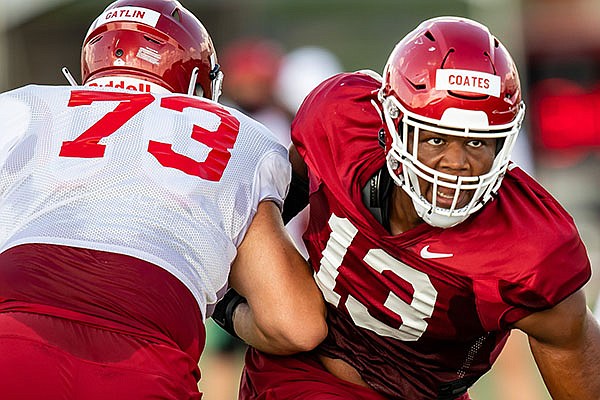 FAYETTEVILLE — Arkansas defensive end Julius Coates is set to return for the Razorbacks in 2021 after not competing in the season finale against Alabama and being ruled out of the Texas Bowl by Coach Sam Pittman before it was canceled.

Coates, a 6-6, 289-pound junior from Rockford, Ill., and East Mississippi Community College, had been dealing with a personal matter not related to the football program late in the season, sources with knowledge told the Arkansas Democrat-Gazette.

Coates posted the lines “Woo Pig” and “Let’s run it back” to his Twitter account on Tuesday and later confirmed his intention to return, a source said.

Coates showed flashes of being the kind of disruptive defensive end the Razorbacks have been lacking in recent seasons with 18 tackles — 3 for lost yardage — and 2 sacks.