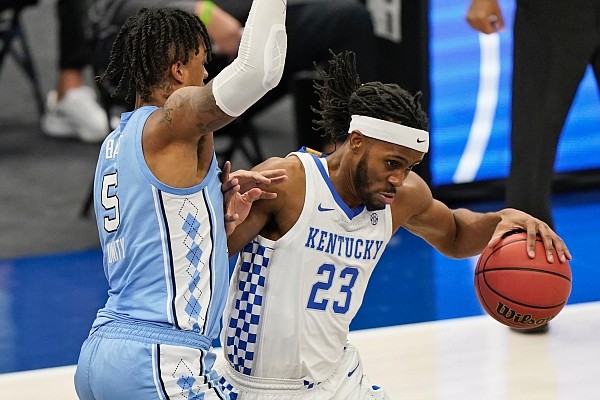 There is a very good reason basketball experts say the SEC is down this season.

It appears something uncommon is happening in the Commonwealth of Kentucky.

One of the most feared basketball programs in the country, one rich in history is average. At least for now.

The first NCAA NET rankings were released Monday, and the team that wins the SEC Tournament so often it has been pegged the Kentucky Invitational was ranked No. 143.

Wildcat fans can’t count that high, and they’ve never had to do so.

Kentucky is 3-6 and can’t be found in The Associated Press poll after opening the season at No. 10.

It appears the best team in the SEC is Tennessee, who the University of Arkansas plays tonight in Knoxville, Tenn.

The Vols are coming off their first loss of the season, an upset by Alabama. The Tide made 10 of 20 three-pointers to get the 71-63 win.

Still, the Vols were No. 3 in the first NET rankings after opening the conference season by clobbering Missouri 73-53 in Columbia, Mo.

Having five of 14 teams in the top 25 does not scream greatness, in large part because Kentucky is off to a slow start.

Their wins are over Morehead State, Mississippi State — after John Calipari got ejected — and Tuesday night against Vanderbilt 77-74.

The Wildcats were down 52-46 against Mississippi State when Coach Cal got his walking papers with 9:04 to play. Bruiser Flint took over, and Kentucky rallied for a 78-73 win in double overtime.

No one is even hinting that Calipari, who is 333-83 at Kentucky in 12 seasons, might be part of the problem. The 61-year-old Calipari seems as ageless as Alabama football Coach Nick Saban, who at 69 is playing for his seventh national championship next week.

But something seems adrift in the Kentucky program this season.

The roster is still loaded with four- and five-star freshmen, but unlike other seasons when Calipari was perfecting the one-and-done — which has been copied by Duke, Kansas and others — there doesn’t seem to be the same beat-the-world attitude this season.

Talented freshman Cam’Ron Fletcher played just two minutes against North Carolina. As the game was winding down, CBS cameras caught him crying and very emotional on the sideline.

Calipari told him to take some time off and do some soul searching.

“Any attitude or actions that are detrimental to this team will not be tolerated — and that goes for everyone on the team,” Calipari said.

Fletcher is back but still buried deep on Calipari’s bench and not getting any playing time.

Then there’s sophomore Keion Brooks, who played in every game last season. He has what has been reported as a mysterious calf injury. He hasn’t played this season, although he was seen dunking during warm-ups before the Mississippi State game.

What this all probably boils down to is basic psychology. Calipari is a genius at getting his teams to peak at the right time, and what has happened so far isn’t really all that important in the course of a season.

Starting now does count, and by the time the Wildcats peak — and they will peak — they will be in the NET top 25.