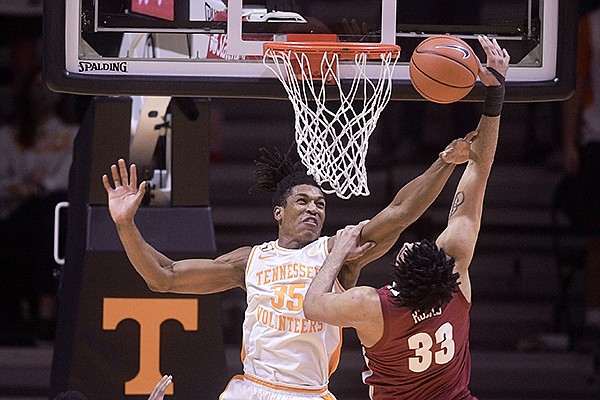 FAYETTEVILLE — After the University of Arkansas basketball team had its worst shooting performance of the season in an 81-68 loss to Missouri, the Razorbacks will try to revive their offense against the nation’s No. 1 scoring defense.

“It’s all about disruption,” said Arkansas Coach Eric Musselman, whose Razorbacks (9-1, 1-1) shot 26.8% against Missouri. “It’s about the offense having to react to the defense instead of the defense being the reactor.

Arkansas vs. Tennessee: How to watch and listen, notables, team comparisons

Amazon describes Kloppenburg’s book — which was first published in 1989 and has been reprinted several times — as a how-to guide for playing pressure man-to-man defense with core principles including switching on every screen and trapping. SOS stands for Sequential Organized Strategies.

Musselman not only has read the book, he knows Kloppenburg personally.

“I actually went to camp with Bob Kloppenburg when I was in fifth, sixth, seventh and eighth grade,” Musselman said. “I know all about his defense. It’s hard to score on.”

“Coach Kloppenburg’s son is a friend of mine,” Musselman said. “He actually came to one of our games here at home.”

Tennessee assistant coach Mike Schwartz — who is referred to as the team’s defensive coordinator in his bio — has become friends with Bob Kloppenburg and implemented some of the SOS principles into what the Vols do.

Schwartz is in his fourth season at Tennessee after previously being a player and assistant coach for Vols Coach Rick Barnes at Texas.

“From the time that I got into coaching, I would say defense is what we’ve done,” said Barnes, who is 66 and has a 716-379 record in his 34th season. “Then when Mike Schwartz came back to be a part of our staff here, I said, ‘Hey, we can take the defense to another level. You can take it and run with it.’

“Mike is the guy that made contact with [Bob Kloppenburg]. They’ve developed a friendship. Mike is like a sponge. He never stops trying to learn.”

Arkansas will try to crack the Vols’ defense after shooting 19 of 71 — including 3 of 23 on layups — in the Missouri game.

“We got after it maybe a little bit more than on a normal Monday,” Musselman, speaking on his radio show Monday night, said of the Razorbacks’ first practice after the Missouri game. “We worked on our layups a lot.

“We had a whole lot of layup stations. I’m sure it’s been maybe since second or third grade that guys did so many right-hand, left-hand layups.”

Barnes said he has plenty of concerns about defending the Razorbacks, who are averaging 88.5 points to lead the SEC and rank eighth nationally. They are led by guards Moses Moody (16.9 points per game), JD Notae (15.4) and Desi Sills (13.9).

“If they’ve got a shot that they worked on in practice and feel good about, they’re going to shoot it. So getting matched up early on defense is really, really important.

“We simply are going to have to be ready to play a high-level defensive game, because regardless of what they did last game, they’ve proven they can put up a lot of points.”

Like Arkansas, the Vols had an upset loss at home Saturday when Alabama beat them 71-63 . The Crimson Tide hit 10 of 20 three-pointers, including 8 of 11 in the second half.

Barnes said more than Alabama’s three-pointers, what hurt the Vols were allowing too many drives without providing help defense.

“It wasn’t the threes that bothered us so much from a coaching staff standpoint, it was the getting blown by the rim shots where you stopped helping each other in the gaps,” Barnes said. “We got frozen and we simply weren’t concentrating, thinking what we need to do, and we can’t play like that.

“You could tell the other day, the way we were playing, Alabama got zoned in. They put us back on our heels.”

The Vols have done what they are supposed to on defense most of the season.

“Tennessee is a Final Four-caliber team with a Hall of Fame coach and five-star players who play extremely hard,” Cincinnati Coach John Brannen said after the Vols beat the Bearcats 65-56 earlier this season. “I’ve seen two what I would call great defensive teams in my career, and that’s Texas Tech — the national championship final team [that lost to Virginia in 2019] — and the potential of this Tennessee team. And I think Coach Barnes will get that out of them.”

Tennessee forward Yves Pons, a 6-6 senior, was the SEC defensive player of the year last season. He’s again leading the Vols on defense by averaging 2.0 blocked shots, including 4.5 in two SEC games.

“I think what makes him so good at it is, he enjoys doing it,” Barnes said of Pons’ all-around defensive skills and blocking shots. “He shows his athletic ability there, and he has great timing.”

Musselman said he doesn’t believe his knowledge of Bob Kloppenburg and his defensive principles being used by Tennessee will give Arkansas an advantage tonight.

“No, because, one, Coach Barnes is one of the best coaches in the history of college basketball,” Musselman said. “And he’s got great athletes that are really long.

“I’ve just been around [the defense] from a really young age and know how they close out, how they’ll help from the strong side corner a little bit.

“But I don’t think it has any bearing at all. I think Tennessee has done a great job studying a really, really difficult defense to score on, and they’ve committed to playing a similar style.”