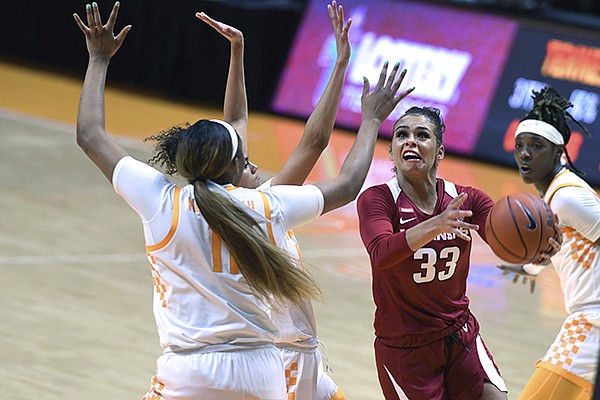 Tennessee hadn’t played a game in 10 days and was forced to pause for a week because of covid-19 issues, but showed no signs of rust on Thursday night.

The Lady Volunteers overpowered No. 13 Arkansas inside and rolled to an 88-73 victory in Thompson-Boling Arena in Knoxville, Tenn., in their SEC opener.

Arkansas Coach Mike Neighbors said his team, which made 9 of 30 three-pointers and shot just 32% from the floor, has to be better.

“There’s certain things we’re just not going to be able to change,” said Neighbors, referring to Tennessee’s significant size advantage. “We have to do us better than we did us. We’ve gotta make more than nine out of 30 threes. We’ve gotta get better ones. We’ve got to get better shots than that.

“And we’ve gotta get some of those tipped balls. So that’s hustle plays, that’s energy plays. And those are things we can get better on. A team that’s gonna be able to put length on us and size we’re always gonna have a certain amount of struggle against it.”

The Lady Vols paused all basketball activities Dec. 29 because of positive covid-19 tests and contact tracing within the program, which caused the postponement of its first two SEC games. They were cleared to resume activities on Monday, but the time off didn’t seem to be a problem.

Neighbors said Burrell’s emergence to go with Davis has helped to make Tennessee a better overall team. The 6-1 junior swing player started the final nine games last season and has picked right back up this season. She came into the game leading the team in scoring at 16.6 points per game.

“You can’t be out of position on her for one second because she does make you pay now,” Neighbors said. “As a whole, when you’ve got those two type of explosive kids that can get it right to the rim, can hurt you from the three-point line and hurt you on the drive, there’s just not a weak side.”

Tennessee, which came in fifth in the country in rebound margin, dominated the boards against the smaller Razorbacks, too. The Lady Vols outrebounded Arkansas 49-36, which led to 18 second-chance points.

Neighbors credited Tennessee for being patient and executing well. The Lady Vols committed 23 turnovers in a loss at Walton Arena a year ago, but had just 11 this time and controlled the pace.

Destiny Slocum added 17 points and Amber Ramirez 15 for Arkansas. They each made 3 three-pointers.

Arkansas returns home on Sunday to face No. 8 Texas A&M in Walton Arena. Tip-off time is slated for 3 p.m.