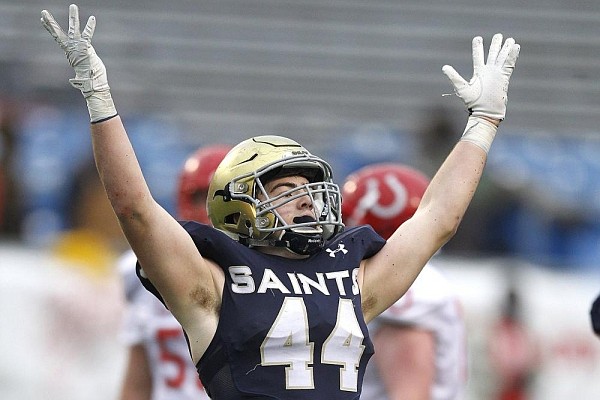 Shiloh Christian linebacker Kaden Henley celebrates during the Saints’ 58-20 victory over Rivercrest in the Class 4A championship game on Saturday. (Arkansas Democrat-Gazette/Thomas Metthe)

“I feel like he’s one of those that will get a big offer,” Conway said. “I don’t know when and where, but the boy can play football.”

New Mexico, Rice, Drake, Columbia, Lehigh and Yale have also reached out. His father, Ashley, is an assistant coach for the Saints, which helped his son’s development.

“He’s a coach’s son and the reason I say that is he just has that football IQ that you see that’s been around the game,” Conaway said. “He’s very physical and he runs well.”

Henley also creates havoc on the offensive side of the ball while playing about 55 snaps per game. He had 45 pancake block, 9 knockdowns and grading at 95%. He also rushed for 140 yards and 3 touchdowns to go with 142 receiving yards.

“I feel like he’s just as a good at the H-back position as he is at middle linebacker,” Conaway said. “Talk about a guy that just creams people.”

He had 66 tackles, 2 tackles for loss, 2 sacks, 1 quarterback hurry and an interception as a sophomore.

Conaway is such an admirer of Henley that he would be willing to let him date his two daughters.

“If they brought him home and wanted me to meet him and they wanted to date, he would be the kind of guy I would say yes to,” Conaway said. “I’m pretty picky. He’s just a great kid. He loves the Lord.”

Henley also excels in the classroom and has a strong work ethic.

“He’s such a pleasure to coach because he wants to please so badly and he wants to work his tail off,” Conaway said. “Over Thanksgiving break and Christmas break, he’s the guy coming up to the school and getting in the weight room.”