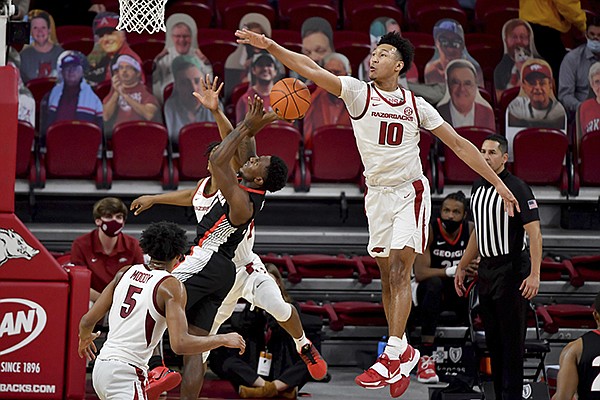 FAYETTEVILLE — With both teams seeking a much-needed win, Arkansas landed a haymaker after halftime from which Georgia could not recover.

Arkansas used a 27-12 run to begin the second half to to break away from a six-point halftime lead to a 99-69 victory.

“We just did not get back defensively as well. We started trying to take things into our own hands offensively. We've got to make some adjustments. We need to do some things differently."

Moses Moody scored 25 points and Davonte Davis scored 20 to become the first Arkansas freshman duo to score 20 or more points in a game since Corliss Williamson and Scotty Thurman did it against Tennessee on Feb. 16, 1993.

Arkansas, which plays at LSU on Wednesday, leads the SEC in scoring and took it right at Georgia, which came in third in the league in scoring.

Davis’ layup with six minutes remaining gave the Razorbacks their largest lead at 88-53.

“Today was the first time that somebody just came at us like that,” Crean said. “We didn’t come out with the same fervor in the second half, but they did and they turned it up. We did not respond even when it was a 12-, 14- ,15-point game when it is still such a winnable ball game.

“I think it was 18 or 20 with 12 minutes left and that’s a lifetime of basketball to go. But today when they were looking back at me, they were not believing in me.”

Crean said he thinks his team turned inward when the Razorback began to overwhelm the Bulldogs.

“There was too much quietness, too much being into our own feelings, too much pouting and not enough manifesting itself in being together,” Crean said. “Our youth, our newness — whatever it is — came out because no one really responded and tried to lead the team through it, and that hurt us; no doubt about it.”

Crean, the former Marquette and Indiana coach, summed up the game rather succinctly.

“In the second half, the wheels came out and we had nobody that wants to get greasy and put the wheels back on,” Crean said.

Jalen Tate added 15 points and 10 assists and Vance Jackson 15 points while knocking down 4-of-5 3-pointers. The Razorbacks (10-2, 2-2 SEC) snapped a two-game losing streak that included losses to No. 12 Missouri and No. 9 Tennessee.

Toumani Camara and Andrew Garcia both had 15 points. Garcia pulled in a season-high 11 rebounds, but Camara failed to get a single rebound after recording 16 at LSU.

Unlike last season when Georgia had Anthony Edwards, who was the the first pick in the 2020 NBA Draft, the Bulldogs don’t have a clear go-to guy.

“Nobody was part of the solution today, unfortunately,” Crean said. “There is no superstar in there. That’s not where we’re at.”

Crean was asked about a couple of calls by the referees that seem to bother him and his team.

“Our kids are way too worried about calls,” Crean said. “You just have to move on. Move on. I’m not commenting on officiating; you know that. The last thing I am going to do in his situations is give way my own money. I’ll never do that. I will make my points behind the scenes and we’ll see what happens with that.

“We’ve got to be able to overcome that, especially on the road. Whatever is consistent or inconsistent, you still have to do what you do, and we did not do enough of that today.”

He was able to pinpoint a couple of problems in his team’s second-half performance.

“I didn’t like our spirit and energy,” Crean said. “We were very immature in that second half and I was trying a lot of different ways to get us out of it and be as positive as I could with it, but I didn’t have a lot of foot soldiers with me today when it came to just taking the bull by the horns.”