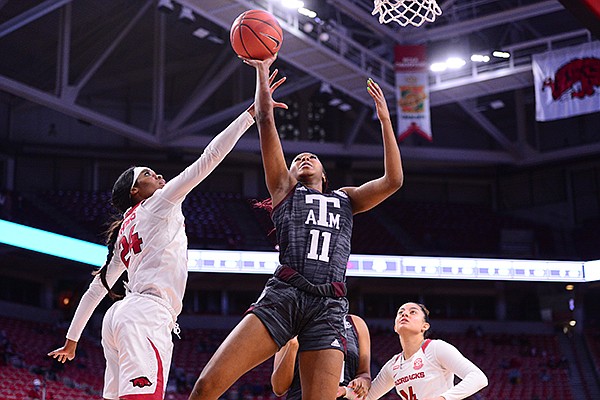 FAYETTEVILLE — Jordan Nixon hit a running shot with under a second left to lift No. 8 Texas A&M over No. 13 Arkansas 74-73 on Sunday.

Nixon’s shot from outside the lane helped the Aggies (12-0, 3-0 Southeastern Conference) keep their perfect season intact. It was also Texas A&M’s only lead in the fourth quarter.

Arkansas’ Chelsea Dungee put up a shot from the left corner at the buzzer, but the shot was blocked.

Aaliyah Wilson, who transferred from Arkansas to Texas A&M, led the Aggies with 27 points. Her defensive play in the backcourt was huge in the final seconds as she poked the ball away from Dungee and forced a turnover with 23 seconds left with Arkansas leading 73-72. Nixon dribbled the clock down until her final shot.

Arkansas led 73-69 with under a minute left before the Aggies made a move. Nixon’s driving layup and free throw pulled Texas A&M within 73-72.