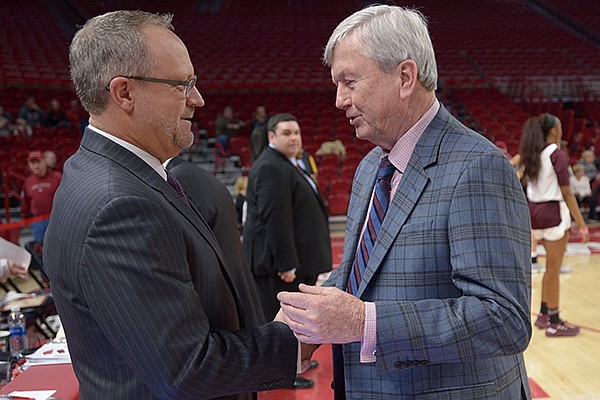 FAYETTEVILLE — Tennessee’s patience and power won out over the pace of No. 13 Arkansas on Thursday.

But don’t expect Razorbacks women’s basketball Coach Mike Neighbors to abandon his racehorse style. Not even with No. 8 Texas A&M led by old friend Gary Blair coming to town.

The Lady Volunteers scored 52 points in the paint on their way to an 88-73 win over the University of Arkansas, but Neighbors won’t waver from his up-tempo philosophy.

“I feel like we’ve got a good team and that we can fix the things we need to fix,” Neighbors said. “And it give us a puncher’s chance against every good team in our league.”

Arkansas vs. Texas A&M: How to watch and listen, team comparisons

That next team is the undefeated Aggies (11-0, 2-0 SEC), who come to Walton Arena today for a 3 p.m. tip-off against the Razorbacks. The game will be broadcast on the SEC Network.

Arkansas (10-3, 1-2) struggled shooting the ball against Tennessee, making 9 of 30 from three-point range and couldn’t keep the bigger Lady Vols out of the lane consistently.

But don’t look for a lot of changes against the Aggies, Neighbors said. He’s still confident in what the Razorbacks do.

“You do what we’ve done and you just do it a little bit better. And I know that sounds simplistic. I know it may sound clicheish but you don’t go in and change a whole lot.”

Blair, who won 198 games at Arkansas from 1993-2003 and led the Razorbacks to their only Final Four appearance in 1998, had Neighbors on his staff during that time. The 75-year-old Blair, who has more than 800 wins as a college head coach and led the Aggies to a national title in 2011, said the matchup will be a clash of styles.

“They want the shot up in seven seconds is what Coach Neighbors likes to do,” Blair said. “And when he can get you to play his pace, then they control the action because of their three-point shooters, [Chelsea] Dungee, [Amber] Ramirez. They can all shoot it.”

But he’s more concerned about the Razorbacks’ driving ability even more than their three-point shooting.

Blair said Neighbors would have fit well at the helm of the Loyola Marymount men’s teams of the late 1980s with their lightning-quick pace.

“Mike stays the course with his system,” Blair said. “He believes in it, and it’s been very good to him.”

Texas A&M will present some challenges similar to Tennessee inside with 6-2 senior N’dea Jones, who averages a double-double, not to mention 6-4 Cierra Johnson.

The Aggies defeated No. 10 Kentucky 77-60 on Thursday. Those are the same Wildcats who held Arkansas to its lowest point total of the season a week earlier.

Neighbors is impressed with Blair’s team.

“I think it’s his best team,” Neighbors said. “It’s his deepest team. He’s bringing three McDonald’s All-Americans off the bench that were transfers from Power 5 programs. Their depth is unbelievable.

“They can beat you inside. They’ve got the league’s best rebounder and a presence. That’s N’dea Jones. And then Cierra Johnson can hurt you down there on the block, too. Every piece you look for in a national championship contender, I think they have it.”

Guard Aaliyah Wilson, the Aggies’ leading scorer who averages 13.9 points per game, also has Razorback connections. The 5-11 senior from Muskogee, Okla., played her freshman year at Arkansas before transferring to Texas A&M.

Arkansas has won two of the last four meetings with the Aggies, but both wins have come in the SEC Tournament on a neutral floor.

Blair said his team must must make shots to control the pace and attack the Razorbacks inside much like Tennessee did.

The Aggies have been efficient offensively this season, shooting more than 50% from the floor as a team. They also shoot a better percentage from three-point range than Arkansas for the season. Texas A&M just doesn’t shoot anywhere close to as many as the Razorbacks.

“What we’ve gotta do is have balance,” Blair said. “I can not play my post player as many minutes as I did [Thursday] because of the pace they bring on you.”