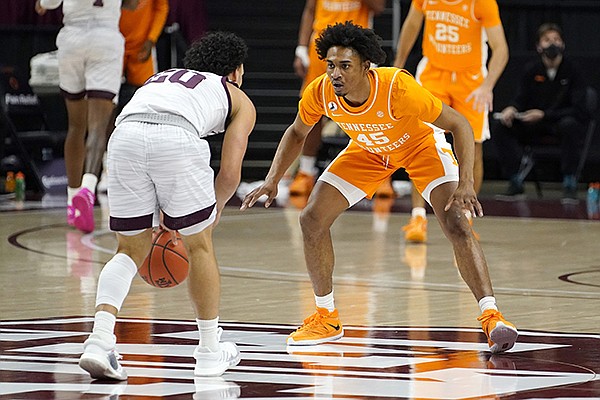 Cooper, a five-star recruit, was cleared to play before the game after the NCAA completed a prolonged inquiry into his eligibility. He finished with 26 points on 8-of-19 shooting with several dazzling passes that led to nine assists. But he was only 1 of 7 from 3-point range and had five turnovers with two of those misses and two miscues coming in the final two minutes.

After seven lead changes, a Jaden Shackelford 3 gave Alabama (9-3, 4-0 Southeastern Conference) a four-point lead that they extended to eight with 6 1/2 minutes left despite Cooper scoring 11 straight points. With 6:15 to go, two Cooper free throws began a 10-0 run that he concluded with a dunk for a 84-82 lead with 4:43 remaining.

Again the lead went back and forth before Herbert Jones made two free throws and Bruner followed his own miss with a basket for a 93-90 edge with a minute to go. Cooper missed consecutive long-range shots and then turned the ball over with nine seconds remaining.

Alabama led 37-36 at halftime, but after Cooper sent a pass to JT Thor for a one-handed dunk to get Auburn (6-6, 0-4) within one, the Tigers took their first lead on a three-point play by Devan Cambridge with under 16 minutes left in the game.

Jones added a career-high 19 points for the Crimson Tide, Shackelford had 11 and John Petty Jr. 10 plus some strong defense on Cooper late. The victory was the fifth straight and No. 1,700 for the Alabama program and snapped a five-game losing streak at Auburn Arena.

Allen Flanigan scored 19 points, Thor 15 and Jamal Johnson and Cambridge 10 each for the Tigers, who have lost four straight.

The teams combined for 37 turnovers, 20 by Auburn that turned into 21 Alabama points.

GAINESVILLE, Fla. — In his first game of the season, Keion Brooks Jr. scored 12 points on 6-for-8 shooting and Kentucky more closely resembled its No. 10 pre-season ranking by throttling Florida 76-58 on Saturday.

Brooks is the only returning scholarship player who played last season, and only until last week was he medically cleared to return to competition after missing the first nine games of the season with a left leg injury.

Although he'd been conditioning and participating with the team in non-contact drills, Thursday was his first full practice since the injury.

Though topping 70 points for the third straight game, the Wildcats exerted high energy on the defensive end and held Florida to 37.5% shooting (21 for 56) and scored 25 points off 16 Gators turnovers.

Brandon Boston Jr. and Davion Mintz each scored 13 for Kentucky and Olivier Sarr 10.

Kentucky has won three straight and will ready itself to play Alabama (9-3, 4-0) in an early-conference matchup for the top spot in the SEC on Tuesday.

COLLEGE STATION, Texas — Tennessee guard Santiago Vescovi scored a career-high 23 points, including six 3-pointers, despite the rough practice before the game to push the No. 9 Volunteers past Texas A&M, 68-54, on Saturday.

Vescovi’s hot hand began early for the Vols (9-1, 3-1 Southeastern Conference) as he hit his first four shots from behind the arc. His barrage was part of a 17-4 Tennessee run that pushed the Volunteers’ lead to 14 midway through the opening half.

Senior Savion Flagg was the Aggies’ saving grace at the end of the first, connecting on three consecutive 3-pointers to pull the Aggies (6-4, 1-3) within six. Flagg entered Saturday’s contests on a 3-for-21 clip from the field over the previous three games.

Texas A&M closed the first half hitting five of its final six from 3-point range, including makes by Quenton Jackson and Andre Gordon, and trailed 37-30 at halftime.

Tennessee’s ball movement continued to open gaps in the Aggies defense to start the second half, leading to a 9-4 run, including two layups and a dunk by Yves Pons.

Tennessee was unable to widen its margin to more than 14 through most of the second half, and the Aggies only managed to pull under 10 once.

A 9-2 run at the end of the game, including five points by Vescovi, secured the victory.

John Fulkerson had 11 points and five rebounds for the Vols and Springer rounded out the double-digit scorers with 10 points.

Flagg led the Aggies in scoring with 12, followed by Jackson with 11.

Pippen had the ball with three seconds left before losing it in the backcourt and fouling.

Tolu Smith added 18 points and seven rebounds for Mississippi State (8-4, 3-1 Southeastern Conference) and Jalen Johnson scored 10. The Bulldogs shot 61%, making 31 of 51 and outscored the Commodores 42-18 in the paint.

Mississippi State led 36-35 after a first half that saw 10 lead changes, five ties and neither team ahead by more than seven.

Molinar sparked a 10-2 run with a jumper-and-one, that gave the Bulldogs some separation at 61-50 with 11:01 remaining. The Commodores erased 10 of those points in less than three minutes.

Mississippi State built another 10-point lead with just under five to play only to see Pippen score nine of his points down the stretch. Pippen and Disu scored 17 of the Commodore's last 20 points.

The Bulldogs are 3-1 in the SEC for the first time since the 2016-17 season. Mississippi State is on a two-game roll after bumping off No. 13 Mizzou earlier in the week and play host to Texas A&M on Wednesday. Vanderbilt, which has dropped three-point decisions in its last two games, travels to Missouri Tuesday.