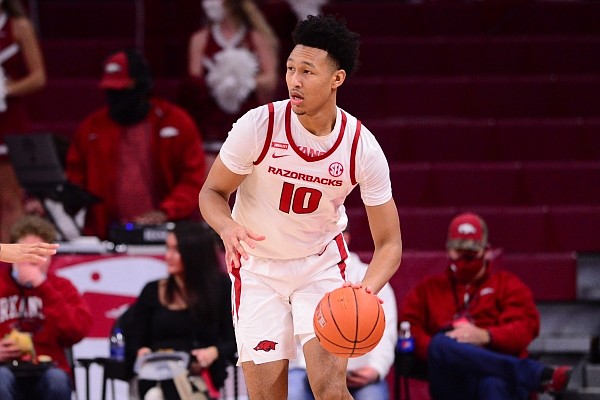 Arkansas forward Jaylin Williams looks to make a play during a game against Georgia on Jan. 9, 2021, at Bud Walton Arena in Fayetteville.

FAYETTEVILLE — Jaylin Williams took a two-handed shove in the back from Moses Moody. Then came a bit more forceful push on the left shoulder from Jalen Tate.

Williams, the 6-10 freshman from Fort Smith Northside, had moments earlier blocked a layup attempt by Georgia guard Sahvir Wheeler out of bounds less than four minutes into the second half of the Razorbacks’ 99-69 win over the Bulldogs on Saturday.

In their own way, Williams’ teammates were expressing their approval of the forward’s play on the interior.

During Arkansas’ last three games, Williams has grown more comfortable on the floor and begun to come into his own in the Razorbacks’ frontcourt in the absence of graduate transfer forward Justin Smith. His positive run for the Razorbacks follows a four-game stretch in which he totaled only 10 minutes and did not see the floor against Oral Roberts on Dec. 20.

Williams earned the first start of his college career last Wednesday at Tennessee and finished with 6 points, 2 rebounds and 1 blocked shot in 14 minutes. Against Georgia, he turned in his most impressive performance since the season-opening win over Mississippi Valley State.

He scored only 2 points but grabbed 9 rebounds (4 offensive) and handed out 2 assists to go with a block and a steal. His play was complete with a pair of charges taken, too.

The Razorbacks outscored Georgia by 29 points with Williams in the lineup.

“I’m just stepping in and doing whatever the team needs for me to do, if that's scoring, if that's rebounding, making shots, whatever it is,” Williams said. “I’m just trying to step in and do whatever I can to help the team. I go into every game just being ready for whatever happens.

“I know the team needs a guy that will come out there and be an energy player. Just coming on the court, I'll dive on the floor if I need to, take a charge or go hard for the extra rebound. I try to come in the game and play as hard as I can.”

One sure-fire way to see the floor under second-year coach Eric Musselman is by being committed to the defensive end. To this point in the season, Williams has proven he is, and he is willing to lay his body on the line.

Williams leads the Razorbacks in charges taken with six — one more than Tate and three more than Arkansas’ other forwards combined.

“First of all, he’s a player that really, really likes to take charges, so he’s a high-charge player for us,” Musselman said. “He’s got the ability to block shots as well. He’s a very good help defender.”

Williams’ numbers in league play may not jump off the page, but he has been productive when called upon. According to KenPom analytics, he has grabbed 21.6% of available defensive rebounds when on the floor and 11.3% of Arkansas’ missed shots.

He has blocked 8.1% of opponents’ 2-point field goal attempts and turned away a team-best four shots in the last three games.

The Razorbacks’ defense was stellar against Tennessee and Georgia with Williams on the floor. In his 72 defensive possessions, Arkansas allowed .61 points per possession, according to HoopLens data. The Vols and Bulldogs combined to shoot just 41% inside the arc and 13.3% beyond it.

The teams' collective offensive rebound rate plummeted to 13.9% — down from 21.1% without him — during his run.

"Jaylin, he's a tough guy,” Davonte Davis said Saturday. “Coming out of high school, he's always been like that. We played AAU together. He just brings a lot of energy.

"We talk about it. Me and him are those two key guys that bring the energy to the team and help the team win."

Musselman said freshman forwards typically take more time to come along than other players, but Williams has met the physicality of the college game head on so far. And he has not been bullied by opposing bigs through four SEC games.

Opponents are 3 of 13 inside the arc with Williams as the nearest defender.

“Both (Davis) and Jaylin are incredible pieces,” Musselman said. “And shoot, our last road trip I met with every one of them — not Moses (Moody) — and had a long talk with them about the importance of those guys and their development and keeping a positive mind and how much we believed in them.

“It wasn’t always going to equate to the minutes they might want or what they expected, but keep working. They’ve done that.”