Against Georgia, Hogs were greatest show around 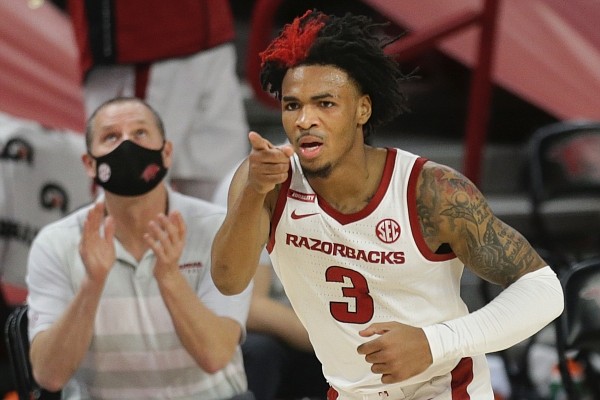 Arkansas guard Desi Sills (3) reacts, Saturday, January 9, 2021 during the second half of a basketball game at Bud Walton Arena in Fayetteville. Check out nwaonline.com/210110Daily/ for the photo gallery.

It appeared the only thing missing was a parade led by someone on a unicycle.

On Saturday, for two hours, it was the greatest show around.

The University of Arkansas romped over Georgia 99-69 in a game that was as much fun to watch as night baseball.

Maybe, it was a giant leap forward for the Hogs.

Coming out of the Tennessee game the only thing that kept them from getting a road win in the SEC was turnovers. They just didn’t protect the ball.

The game before in a loss against Missouri was just an overall dismal performance.

Against the Bulldogs, it was like the game with the Vols was a building block more than a setback.

Georgia opened with a pair of three-pointers and a field goal by Toumani Camara for an 8-4 lead.

And the fight was on, only it was a 40-minute marathon and someone forgot to tell the Bulldogs.

Moses Moody didn’t get his first points until the 12:04 mark of the first half, and those came on a pair of free throws. But for the next 28 minutes he was almost magical.

Just 48 seconds after those free throws, the Dogs were up 20-19 and it would be their last lead of the day.

The Razorbacks were unselfish, disciplined and determined.

Jalen Tate would have 10 assists, distributing the ball to the guy with the highest percentage shot, which at times was an open three.

Davonte Davis had six assists. All total, on 36 field goals the Razorbacks had 24 assists.

That is playing smart.

Incidentally, Tate also had 15 points and Davis 20 as five Razorbacks finished in double figures, led by Moody who had a career-high 25.

More than likely it is not going to be the high mark for the freshman.

He claimed after the game that he is a role player and that he doesn’t do anything exceptional. That he just tries to help the team win.

By his definition, the Razorbacks had seven role players in the win.

And he does help the team win.

However, exception must be taken by the claim that he does nothing exceptional.

People in Little Rock have been talking about Moody since he was in junior high.

As a freshman at Parkview, he helped the Patriots make the finals of the state championship.

He transferred to North Little Rock his sophomore season, and the Charging Wildcats won the state title.

At that point, Moody and his family made a huge decision — one that would include sacrifices — but he transferred to Montverde Academy in Florida for his final two years of high school.

Moody started on a team where all five seniors signed with Power 5 schools. Cade Cunningham is considered a one-and-done at Oklahoma State and could be the first pick of the 2021 NBA Draft.

It is argued it is the best high school team in history.

However, Moody is not a one-man show for the Hogs.

He may have big-time written all over him, but he does do the little things, too, and that’s what this team, which has seven Arkansans on the roster and a bunch of transfers, needs.

Eric Musselman is still blending this team together and on Saturday he saw the guys perform closer to their potential than he has at any other time this season.

Georgia isn’t great, but to beat any SEC team by 30 speaks for itself, and it could have been worse but Musselman cleared his bench late in the game.

On Saturday, the Razorbacks appeared to take a major leap forward.

Now they have a chance to build off it with back-to-back road games at LSU and SEC-leading Alabama.

Saturday wasn’t a perfect game, but it was a complete team effort.